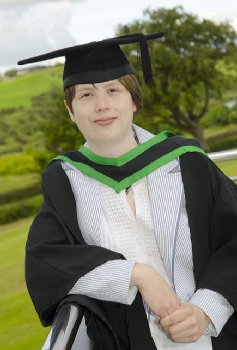 Today’s graduation ceremony will be an especially poignant for one University of Ulster student, who was forced to drop out of her course when she was diagnosed with cancer.

Claire Henderson, from Omagh, was devastated to be told by doctors that she was seriously ill – just two weeks before her final exams were about to begin in 2007.

“My life was turned upside down and within a week I had begun intensive treatment, initially I had six months of chemotherapy, then for four months after that I was very ill and almost died a few times during that period,” she said.

“I underwent more treatment including stem cell transplants and slowly things started to turn around for me and I’m delighted to say that I have been in remission since December 2008.”

Claire attempted to return to the Business with Computing BSc Hons degree at the Coleraine campus, in September 2009, but the side effects from her treatment made studying difficult.

“I have a constant ringing in my right ear and poor concentration and the thought of exams terrified me, so I ended up leaving,” she said.

“But the course lecturers worked out a way for me to return last year. I was assisted by a study coach, I didn’t have to attend lectures and I could submit coursework instead of sitting exams and that really worked for me.

“I’m very grateful to staff at the University for accommodating me and especially my coach, lecturer Liam Campbell, without him I wouldn’t have made it through the year.

“I never thought I would get to the graduation ceremony - it’s great to be able to graduate,” she added.