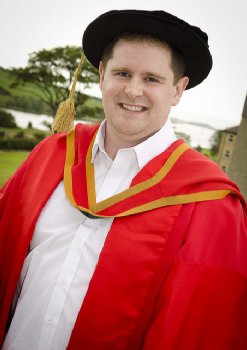 Belfast man, Barry Kerr, who is involved in research to develop new treatments for diabetes today receives a PhD at the University of Ulster’s summer graduation ceremonies at Coleraine.

Barry explains: “Gut molecules produced in the intestine are released following eating. Once in the circulation they stimulate the secretion of the hormone insulin, which lowers blood sugar concentrations as well as suppressing appetite.

“Unfortunately, these naturally-occurring gut molecules, known as GLP-1 and GIP, are very short-acting so we are developing longer-acting versions to make them work more effectively.”

“The research suggests that future therapies may not only focus on single drug targets but could be used together with other antidiabetic/antiobesity drugs offering a targeted ‘smart therapy’ which will hopefully improve the lives of adults and children suffering from Type 2 diabetes and obesity.”

Dr Gault says that one of the bonuses of exploiting naturally occurring molecules is that they are much more likely to be better tolerated by the body than synthetically-manufactured therapeutic agents.

“It is now well-known that Type 2 diabetes is associated with the huge rise in incidence of obesity. Given this, bioengineered gut molecules that can regulate blood glucose control and suppress appetite may be particularly beneficial in the long-term treatment of obesity-related diabetes.”

Barry, who graduated with BSc Hons in Sports Exercise and Leisure from Ulster in 2004 and is currently studying Medicine at the University of Dundee, admits that his career path to date has not quite followed a conventional path.

“When I graduated in 2004, I didn’t have a job so I volunteered to take part in a diabetes research project. When the project was over, I decided to go back to university to complete a Masters in Research at Coleraine and then a PhD focussing on diabetes research.”

His PhD research in turn prompted an interest in Medicine and he has just finished his first year as a Medical student at Dundee. A former pupil of St Mary’s CBS on the Glen Road, Belfast, Barry is a keen exponent of the martial arts and has been helping out at his alma mater by running strength and conditioning classes for the pupils.