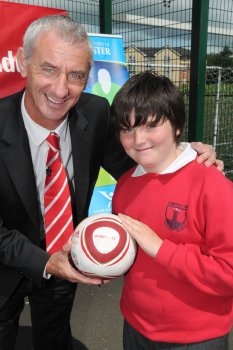 Liverpool football legend Ian Rush was at the University of Ulster today to announce the launch of the summer series of the Liverpool FC Football Academy.

The patron of the scheme, Rush announced that the elite Academy coaches will host soccer schools in August at both the Magee and Jordanstown campuses.

Primary school-aged children from across Northern Ireland can sign up for the Academy and pick up tips from the coaches and Liverpool stars.

More that 100 children took part in the first three-day camp at Easter and learned to play ‘the Liverpool way’.  The Academy schools are held in association with the charity, Happy Children.

The camps take place at Ulster’s Magee campus on 2-4 August and 24-26 August, and at the Jordanstown campus on 9-11 August. Full details can be found on www.liverpoolfc.tv/soccerschools

Caption: Ian Rush with Graeme Stewart, a pupil at Lisnagelvin Primary School, Londonderry at the launch of the Liverpool FC Football Academy summer camps. The Liverpool star met local schoolchildren when he visited the Fitness Complex at the Magee campus's Duncreggan Student Village. 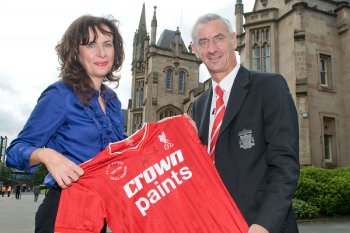