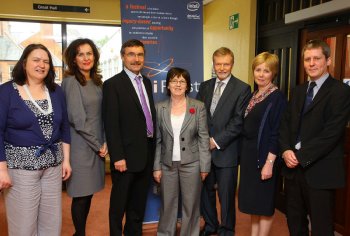 Judges at the ‘North West Sci Fest’, held at the Magee campus of the University of Ulster, said the exceptionally high standard of entries augurs well for the future of STEM subjects (Science Technology Engineering and Maths) in local schools.

Mr Gerard Hughes, a project manager with Sentinus - an educational charity which works with schools and colleges throughout Northern Ireland to promote engagement with STEM subjects, said the event’s success was further evidence that funding for schools under the Science Specialism Scheme is paying dividends as greater numbers of young people are now studying STEM subjects.

Over 200 pupils from primary and secondary schools displayed their projects at the North West Sci Fest at Magee ,which was the latest in a series of one-day science fairs nationwide aimed at encouraging young people to study science by giving them an opportunity to present and display their scientific investigations

Welcoming the pupils and their teachers to the campus, Professor Deirdre Heenan, Provost and Dean of Academic Development at Magee, praised by the high standard of projects on display and said she was particularly impressed by the way the exhibitors engaged so enthusiastically with science to bring their projects to life.

She urged pupils and teachers to take a good look around the campus and find out more about what goes on there. Her key message was: “This is your university and I want you to feel part of it. We’re open for business and you should all feel welcome here.”

Mr Hughes said: “The learning experience coupled with the opportunity of sharing their results with their peers and the judges at SciFest takes students to another level beyond just memorising facts. Students are then more likely to leave school equipped with the necessary skills for solving “real world problems.”

Welcoming the pupils and their teachers to the campus, Professor Deirdre Heenan, Provost and Dean of Academic Development at Magee said she was really impressed both by the high standard of projects on display and by the way the exhibitors engaged so enthusiastically with science to bring their projects to life.

Thanking Magee Provost Professor Deirdre Heenan for hosting the event and the University’s Office of Innovation for its support, Mrs Gill said the event was ideal for showcasing the work in science being done in local schools.

“We hope that participation in events like this, especially within the grand setting of Magee Great Hall, will inspire our young people to pursue STEM subjects beyond the age of 16 and furnish them with the skills needed to be active participants in the increasingly knowledge based workforce we rely upon.”

“We are delighted to have been involved in this event, in conjunction with Mark Lowe and his colleagues in St. Mary’s College and would like to congratulate all the students and their teachers on their tremendous efforts in preparing such diverse and enterprising Science projects.

“Scifest continues to go from strength to strength with entrants from both the primary and post-primary sector and we were particularly pleased this year o welcome students from Hunter House College in Belfast this year.”

The inaugural SciFest was held in the Institute of Technology, Tallaght, Dublin, in 2006. Following a second successful SciFest in Tallaght in 2007 the project was launched nationwide. In late April/early May 2008 a total of nine Institutes of Technology hosted SciFest science fairs. In 2009 the number of venues increased to 15. Since SciFest was launched nationwide in 2008 a total of 6241 students have exhibited 2613 projects. This reflects an increase in participation of 23% in 2009 and a further increase of 34% in 2010.