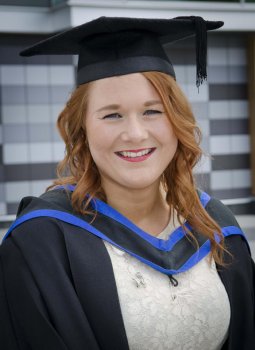 Journalism graduate Hannah Grant, from the famous Scottish golfing town of Carnoustie, has picked up a coveted University of Ulster prize for her sensitive, balanced and informative approach to reporting.

Hannah (22), who received her BA Hons (First Class) in Journalism at the summer graduations this week, has been awarded an annual prize which commemorates the founder of Ulster Television.

Her success in securing the “Brum Henderson Young Journalist Award 2011” adds a dimension to her journalism profile that is bound to bring her to the attention of broadcast and print media editors as she scouts for a foothold in the craft that is her passion – Journalism.

The prize is endowed to the University annually for final year students on the BA Journalism programme in the School of Media, Film and Journalism.

Hannah was the top performer in final year Journalism Practice. During her course she produced wide-ranging material that demonstrated a nose for news, accurate reporting, balance and a flair for broadcasting.  She received her degree at the Coleraine campus graduation ceremony on Tuesday.

Her lecturers said she produced an excellent radio news package on the parking problems of students on the campus and, as the presenter of a group-work radio current affairs programme, her broadcasting skills shone through.

For her final journalism project she chose a topic that she says is less taboo now than 20 years ago but which still arouses deep-seated differences of opinion among the general public.

She persuaded a lesbian couple living in Northern Ireland to talk about using IVF treatment and the forthcoming birth of their first child.  In a radio documentary, she examined the topic from all angles and aired all sides of the argument in a sensitive way.

For her dissertation she analysed consumption patterns for online news compared to those provided by traditional media of print and broadcasting. The external examiner praised the quality of her work overall but especially her success in providing high quality journalism practice informed by academic theory.

Hannah, who travelled to the Coleraine ceremony from her home near Dundee, said she was looking forward to meeting up with her fellow students again.

“I enjoyed my three years at Ulster, and I worked hard too. I didn’t think when I originally decided to go to a university that was away from Scotland, that I would find it hard to leave at the end of my degree studies. But it was. I found it quite hard to leave.”

Caption: Hannah Grant, from Carnoustie in Scotland, winner of the Brum Henderson Young Journalist  Award 2011, graduating with a BA Hons (First Class) in Journalism at the University of Ulster.