Exploring The Secrets of the Seabed

An international team of researchers led by University of Ulster Professor Andrew Cooper is about to embark on a  voyage of underwater discovery that will establish whether Ireland was ever joined to Britain by a land bridge.

Exploring The Secrets of the Seabed 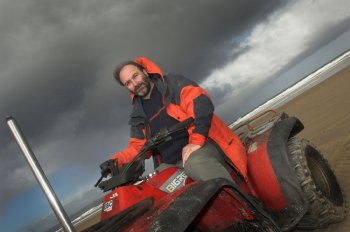 An international team of researchers led by University of Ulster Professor Andrew Cooper is about to embark on a  voyage of underwater discovery that will establish whether Ireland was ever joined to Britain by a land bridge.

The aim of the three year project is to determine just how far sea level fell in the Irish Sea during the last Ice Age and how changing land levels, ice sheets and global climate change affected it.

Of particular local interest is whether sea level fell so far that Ireland was joined to Britain by dry land.

According to Professor Cooper,  The question of whether Ireland and Britain were ever connected by land has never been answered satisfactorily and there are many competing hypotheses based on everything from the different mammal populations, archaeology, and computer modelling.  Nobody has ever looked at the geological evidence that is preserved on the sea floor. ”

The project, funded by the Natural Environment Research Council (NERC) to the tune of almost a million pounds, involves systematic assessment of geological evidence on the seabed at sites all around the Irish Sea offshore of Bantry Bay, Waterford, Cardigan Bay, Drogheda, Morecambe Bay and Belfast Lough.

“This type of work requires a range of specialised approaches and we have assembled a uniquely experienced international team to allow us to investigate this problem properly” said Professor Cooper.

“In this first research cruise on a state-of-the art research vessel we will be collecting geophysical data to locate submerged shorelines, river valleys and deltas throughout the Irish Sea.

"We have chosen these particular sites because they have the highest potential for preserving these types of environment.  We will carefully analyse all this information to find sites where we can extract material from these submerged shorelines that will allow us to radiocarbon date them.

"Next year we will go back on a bigger ship and collect cores of sediment from those locations to help us reconstruct the past environment” said Professor Cooper.

The project, however, is of more than regional importance and was given the highest possible ranking by NERC’s peer-review college, placing it in the ‘outstanding, exceptional scientific merit’ category.

As Professor Cooper noted: “As well as recording global changes in the volume of the ocean, the sea level record is a yardstick for unravelling how ice interacts with the earth's crust.

"The northern part of the British Isles was covered with thicker ice during the ice age, and this was the last to melt.

"We know that land is pushed downwards under the weight of the ice and then bounces back when the ice is removed. Because of this, sea level in the British Isles records the combined effect of global changes in the ocean and regional changes from climate change.

"The British Isles sea level record is of global importance when it comes to understanding how the earth responds to ice loading and unloading - a process we see at work right now in places like Greenland because of global climate change.