A University of Ulster lecturer has been awarded an honorary Professorship from the University of Applied Sciences, Kempten, in Bavaria, Germany. 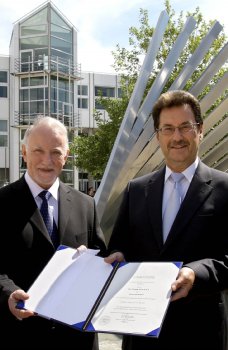 A University of Ulster lecturer has been awarded an honorary Professorship from the University of Applied Sciences, Kempten, in Bavaria, Germany.

Dr Frank Owens, who is a senior lecturer in the Engineering Research Institute in Ulster’s School of Engineering, received the honour in recognition of his long-standing involvement in the development and directing of collaborative Masters (MEng) degree programmes between the University of Ulster and the Universities of Applied Sciences in Augsburg and Kempten.

“I was delighted to receive this honorary professorship, which represents the high point of my academic career, and is really in recognition of the University’s and the School of Engineering’s support and commitment to this quite unique and very successful collaboration in undergraduate engineering education,” he said.

“Since 1996, I have been Course Director for these collaborative MEng programmes and also the School of Engineering’s Coordinator for the ERASMUS Exchange programme. It has been a privilege to teach, supervise, and generally work with high-ability and highly-motivated students, and to have played a small part in this very successful, unique and long-standing collaboration.”

Ulster’s School of Engineering forged strong links with the Electrical/Electronic Engineering Departments in the Universities of Applied Sciences after establishing an exchange programme some 25 years ago. This coincided with the launch of the European ERASMUS student exchange programme in 1986, which provided a unique opportunity to nurture the benefits of trans-national cooperation in education.

In 1990 the collaboration between the Universities developed further with the establishment of a joint MEng course in Electronic Engineering (Electronic Systems). In 1994 the course was modified and enhanced to allow local students to simultaneously obtain the double degree of

“This collaborative double degree programme has recently been expanded to include Electronic Engineering, Mechanical Engineering and Mechatronic Engineering. It has been re-designed to meet the requirements of the European Union standard for Engineering courses, the so-called ‘Bologna Model’,” said Dr Owens.

“The programme continues to thrive and typically produces an output of 20 to 25 graduates every year. All of the joint MEng programmes are now accredited by the Institutions of Engineering and Technology (IET) and Mechanical Engineering (IMechE).

Dr Owens, who is originally from Ballygawley, Co Tyrone, said the joint courses greatly enhance students’ employability and confers on them a greater freedom to practice their profession throughout Europe.

“The benefits for students of learning to adapt to other industrial and social cultures are immeasurable and many local Ulster graduates are enjoying rewarding professional positions in Europe and further afield as a direct result of their academic and professional training in Germany.”