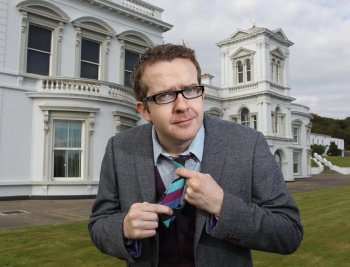 
A University of Ulster researcher hits our TV screens tonight night with a new mind bending show set to shock and amaze.

The David Meade Project is on BBC One NI on Wednesday 12 January with David, a doctoral researcher and part-time lecturer in International Business at the University of Ulster’s Magee campus, showing his skills as a mind reader.

Reading people’s minds he has never met, being able to extract their bankcard pin number from them or the name of their first love, is not where it ends for David who also uses his techniques when teaching.

The 28-year-old says that he tries to teach students simple memory patterns that can help them remember entire essays and possibly help improve their grades.

“There are a series of simple methods of memory that I try to teach the students that can help them remember essays so that when they go in to an exam they have everything at the their disposal to do well. The other said of the story is of course that they first have to write a good well thought out essay to remember,” said David.

During his own studies at university David used his mental powers to succeed as he trained his mind to memorise entire essays capable of helping him pass exams. The technique obviously worked as he graduated with a first class honours degree in Hotel and Tourism Management in 2005 and he picked up the DaVinci Cup award as the highest achieving student in the Strategic Hospitality Management module.

David, who is from Banbridge, Co Down, uses what he calls a mix of suggestion and persuasion using two methods. Firstly implanting a thought in someone’s mind without them knowing it, and if that doesn’t work trying to find out what they think through a combination of deciphering of body language and interpretation.

“In the show I do a lot of fun things and explain some of what is done so that people can try it out at home,” said David.

Having already been compared to mind-reading virtuoso and illusionist Derren Brown, David has already been wowing audiences at live events throughout the UK and Ireland and the show is taking his abilities to the next level.

“The one way in which I differ from Derren Brown is that he comes across as being very suave, flawless trickster, but anything that seems to go a little wrong in the show we keep in, but that’s mostly because anything that seems not to have worked may not be what it seems.”

In the first episode, David investigates intelligence and attempts to use his talents to make someone smarter.

The David Meade Project is on BBC One NI on Wednesday 12 January at 10:45pm.

Now on Facebook: get the latest news and information from the University of Ulster: