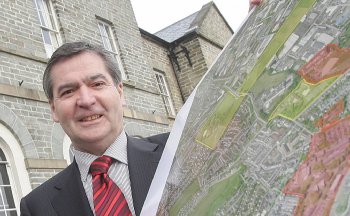 Read the full text of the Vice-Chancellor's article below.

NORTHERN Ireland desperately needs the right investment to lead us out of recession.

That key investment is in the skills that will rebuild and rebalance our economy.  Further education colleges and employers’ training programmes generate important skills for the economy.

However in today’s knowledge economy it is higher education – and the research and development that goes with it – that will drive our economic growth and make us internationally competitive.

Many of Northern Ireland’s schools are excellent and half of school leavers go on to university – a superb ratio, which is the best in the UK.  Yet there is something very wrong.

A third of those school leavers go on to study in Scotland, England, Wales, or the Republic of Ireland.  Most do not return to Northern Ireland.  Instead, they help build the economies in the areas where they study.  Meanwhile we subsidise the living expenses of our undergraduates who study outside Northern Ireland, so paying many of our best people to develop other nations’ economies!

This was demonstrated by the record number of applications to the University of Ulster last year.  In particular, applications to Ulster’s Magee campus rose substantially.  This is a reflection both on the high quality courses on offer  on our Derry-Londonderry campus – it has recognised excellence in robotics, nursing, creative arts and technologies, law and Irish studies – and the growing profile of Derry-Londonderry as City of Culture 2013.

But, tragically, the University had to turn down many, many applicants.  We simply do not have the places to meet the demand from students.  This situation will get worse as tuition fees for Northern Ireland students rise in England, Scotland and Wales, encouraging more students to study while living at home.  This makes it more important and more urgent to expand the university sector in Northern Ireland.

Yet universities in Northern Ireland are restricted in size by the Maximum Student Numbers cap –the MaSN.  This cap needs to be removed by government here if more graduates are to be produced in Northern Ireland and if our skill base is to improve to enable our economy to grow.  At present, we have, relative to our population, the smallest higher education sector in the UK.

The Government recognises the need to ‘rebalance the Northern Ireland economy’.    As part of this rebalancing, our sub-regions – particularly the North West – must get stronger.  This is why the University of Ulster has joined with the University for Derry group, Derry City Council and the Ilex urban regeneration company to propose a three-fold expansion of our Magee campus – and this is now central to the regeneration plan for Derry-Londonderry.

That plan proposes the expansion of our Magee campus  to 9,400 full time equivalent students, focused especially on courses that drive the modern economy – science, technology, engineering, maths (STEM) and in the new creative and sustainable technology industries.   This would provide the raw materials – suitably skilled graduates - for new high tech indigenous and inward investment companies.

The projected benefits of expansion vastly exceed the cost.  Economic modelling shows it would generate a benefit to the city and Northern Ireland of over £400m a year and rising.  It would also enhance Derry-Londonderry’s reputation   as a University City - positively changing its status, confidence, attractiveness and future.

As a first stage in that expansion, we have made a bid to the Northern Ireland Executive to increase full-time undergraduate numbers by 1,000 students over the next few years. This has received widespread political support.

The prize we seek is the transformation of the economic fortunes of Derry-Londonderry, enabling it to contribute to Northern Ireland’s economy.  Thousands of new jobs can be attracted and created.  Wage levels – not just for graduates – would rise.  It would help solidify the peace process.

And we can learn from many other countries - including the United States, China, India and even Poland and Portugal - that have increased investment in higher education, in part to combat the economic crisis.

They understand the importance of investing in skills to grow high value economies.