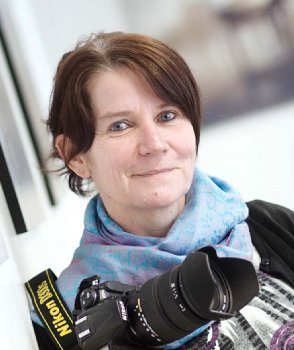 Dr Sarah Edge of the Centre for Media Research in the School of Media, Film and Journalism at the Coleraine Campus has been appointed Professor of Photography and Cultural Studies.

Professor Edge’s appointment recognises her innovative work across a number of areas. She is an acknowledged pedagogic expert on the delivery of media practice in an academic context.

She has published extensively in the area of early Victorian photography and has enjoyed a successful career as a feminist photographer. The appointment also recognises her leadership and management role within the University as demonstrated by her roles as Head of School for Media, Film and Journalism and Director of NI Skillset Media Academy, the innovative industry education partnership.

Professor Edge’s expertise in this area of teaching and learning has also been acknowledged by outside bodies.

She represented Northern Ireland on a select panel of 17 media academics tasked with writing Quality Assurance Agency for Higher Education, Subject Benchmark for Communication, Media, Film and Cultural Studies and currently she works with the Sector Skills Council for the Creative Media Industries by acting as an advisor on education for the Northern Ireland Board.

Originally from Farnborough in Hampshire, when Professor Edge joined Ulster’s lecturing staff in 1991, she already had a well established career as a feminist photographer, curator and writer.

She continued this dual pathway of research outputs and is now recognised as a leading academic in the area of critical studies on early photography in a British and Irish context, as well as her photographic practice.

She secured AHRC and Arts Council funding for her photography research and in 2005 held an impressive one person photographic show – Memory, Myth Photography – at the Context Galleries in Derry City in 2005.

Professor Edge has also played a leading role in developing a research culture for photography at Ulster.

In 2003 she was a member of the team that successfully secured a £3.1 million grant from SPUR (Support Programme for University Research) to establish the Centre for Media Research where she led the photographic research strand.

She is currently working on a book that will examine the earliest known photographic archive of working class women that was complied by Arthur J Munby in the 1860s.

Professor Edge has also been invited to take up a photographic residency in Donegal with an objective of creating a new photographic exhibition which will look at the relationship between early domestic photography and the creation of an Ulster Scots identity.