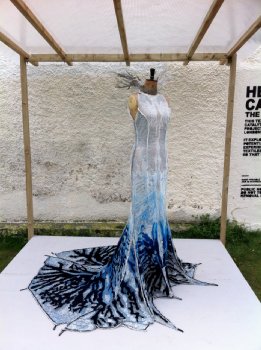 A revolutionary new concept in textile production has led to the creation of the world’s first “air purifying” dress. And if the prototype is anything to go by it proves that, in the future, this genre of environmentally responsible fashion can be bang on trend without sacrificing style.

The floor length gown is part of the Catalytic Clothing project, a collaboration between experts from the University of Ulster, University of Sheffield and London College of Fashion.

They set out to produce a fabric which could eliminate pollutants, making the air around us cleaner and leading to improved respiratory health. The end result is the stunning, textile-sculptured dress entitled “herself” and it’s no ordinary catwalk creation – in fact, at this stage it can’t even be worn, as this prototype is constructed from pliable concrete and textile.

Trish Belford, Senior Research Fellow at the School of Art and Design at the University of Ulster collaborated with Professor Helen Storey from the London College of Fashion in this cross discipline creation, with the science behind the project being led by Professor Tony Ryan from Sheffield University.
“Utilising textiles, fashion, film, bespoke social media, transport and the built environment, Helen introduced the concept of clothing/textiles that can purify air – ultimately to improve public health but also to engender public debate and interest,” explained Trish.

“The way to achieve this was to make a concrete and textile dress, pushing the boundaries of what would be possible in terms of bringing materials with polarised characteristics together and showing them in a beautiful and provocative final form. “Existing technology, used in sunscreens and glass cleaning, was diverted towards the development of a textile that could potentially deliver a solution to air pollution.

”A number of familiar and new technical procedures were used to produce the dress, which was created by Trish, and assisted by Duncan Neill (textile technician at The University of Ulster) and Aoife Ludlow (from Tactility Factory Ltd, a University of Ulster spin-off company).

“By subverting existing textile processes and normal technical procedures, the search for beauty with purpose was the underlying concept,” said Trish. “The core challenge, which engendered rigorous discussion, was how to keep the association with an air purifying technology that already exists upon urban surfaces (such as concrete), hard, rigid, cold and durable, with the notion we wanted to introduce – that the same technological capability could be deliverable onto your clothes.

“This is where the technologies developed by Tactility Factory Ltd were crucial to the complex combination of a soft textile that could be wearable and concrete that could deliver the message already developed.”

Trish explained that a series of development sessions were carried out in Belfast using a wide range of challenging experiments, all trying to identify ways of ‘joining’ a soft, tactile fabric to concrete.  These included flocking, devore, indigo dipping, printing, concrete spraying and mould forming. Before finalising any of the processes a systematic method of print and spray application of a specialised treatment was carried out by Professor Vyvyan Howard and Dr Clifford Barnes from the Centre for Molecular Biosciences at Ulster, to establish which processes bonded in the most effective manner.

Said Trish: “The final ‘recipe’ was determined by aesthetics, wearability (for the model shoot) and a dress that would keep both the material and narrative link with concrete together with the delicacy of a couture garment.

“The final agreed formula was a cloth splashed with concrete (bead like) on the inside of the devored velvet. The patterning of the lungs was dark and polluted at the base of the dress, while the upper part of the dress remained clean, signifying the purification of the lung area.

“‘Herself’ was installed outside in the centre of Sheffield for a period of three weeks last October, engaging the public in a visual debate around air pollution.

“A short film about the dress, starring the super model Erin O’Connor, has been made and given unprecedented visual collateral. Bio images, produced by Vyvyan Howard’s, team have also provided stunning visual moments within the short film.
“This will be rolled out via the web from March this year, in conjunction with the next showing of ‘herself’ at The University of Newcastle gallery as part of Newcastle Science Festival.”

The dress and film will be included in the University of Ulster Festival of Art and Design, which takes place in June 2011.