Watch Out! There's a Hairy Shark About 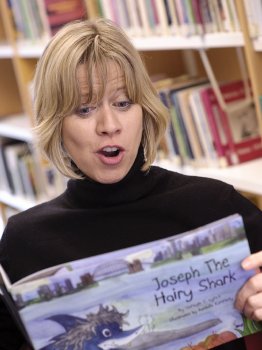 A hairy shark tale may seem like an unusual teaching aid but Dr Oonagh Lynch of the University of Ulster, has added her own creative twist to help inspire the next generation of entrepreneurs.

As Ulster’s Intellectual Property Manager, her role is to promote innovation and help to protect and commercialise the innovations and technologies created by the University’s academics and students.

“I’ve had the privilege of seeing at first hand some incredible inventions and creations coming to fruition but I think we can always do more to encourage innovation among young children,” she says.

To help get that message across, Oonagh has drawn on her own professional experience as scientist turned intellectual property specialist to write and publish her own fun book about “Joseph the Hairy Shark” - who also happens to be a very clever inventor.

“Joseph the Hairy Shark” has been beautifully illustrated by a talented young illustrator, Danielle Kennedy from Ballymena who is a first year Psychology student at Ulster.

Oonagh  explains: “As a child of the ‘Tomorrow’s World’ era, I was inspired by Judith Hann, who taught me to be curious and question how the world around me worked. As a result, I got really interested in science. I studied Biochemistry as an undergraduate before completing my PhD at Imperial College in London, where my doctorate research was in the area of lung disease and asthma.”

For the next few years, Oonagh, who is originally from Park in County Derry, travelled and worked as a research scientist including spell at the University of Sydney in Australia. She admits to always being a bit of a closet scribbler but living in Australia really gave her the writing bug.

“When I eventually moved back to Northern Ireland and settled in Holywood, Co Down, I joined ‘The Writer’s Bureau’ and took a creative writing course. The course trained me to be an observer of life, the people around me and the matters that interest me.”Oonagh says her love of science and writing was matched by genuine intrigue about the mechanics of business and innovation, and so she took a leap of faith into the unknown and decided to retrain as an intellectual property lawyer.

“I swapped my lab coat for a suit and my pipette for the pen but after a while I really missed the University setting, so I was delighted to be appointed to my present position as Intellectual Property Manager.”

Oonagh says the book – which is aimed at children aged five years and up - is another way of driving home the message about the importance of creative thinking in business.

“The book describes Joseph’s encounters with a number of wonderful little characters including the naughty minnows, a wheezy lungfish named Laurel; Stephen Sting Rays who keeps hurting his friends with his barred tail; Clarke, the blind Batfish, and fearless Scooter Skatefish who loves surfing in dangerous places!”

The book also has an important underlying message, she continues.  “Some children might get bullied at school for not being ‘cool’ or part of the ‘in’ crowd, so the moral message of the book is to encourage children to be kind and helpful  - and not to judge a ‘book’ by its  cover.”

“Joseph the Hairy Shark” is available online at www.josephthehairyshark.com.