Ulster Brings Banks and Businesses Together 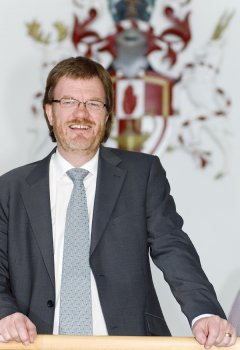 The University of Ulster is to host round table discussions between banks and businesses which will focus on how to improve the flow of funds and ease the financial burden on local companies.

Ronnie Patton from the University’s Ulster Business School is behind the new, ‘Business Banking Round Table’ initiative, which is being supported by the British Bankers’ Association at both a local and national level.

Representative organisations for banks and businesses will attend the series of meetings, which are due to begin later this month.

Mr Patton, a senior lecturer in Accounting, announced details about the initiative at the recent Better Business Finance Task Force meeting in Belfast, which was organised by the British Bankers’ Association and supported by the NI Chamber of Commerce.

He has been speaking to businesses and banks over the past year about the financial problems they are facing.

“Many businesses are finding it extremely difficult to obtain finance and they are puzzled when banks report that they are making funds available,” said Mr Patton.

“It’s clear that closer alignment between what businesses think is a valid proposal, and what banks mean by the concept, is required. The only way to bring the two perspectives closer together is for open and honest dialogue on key issues.

“While there are a number of individuals and organisations that must have a voice in finding a solution to the lack of alignment, there are two basic problems; firstly, there is no coherent and continuous forum for discussion and secondly, each suggestion is perceived as being associated with a particular perspective. As a neutral environment, the University can provide a base to overcome these barriers.

“There is a need to ensure that competition between banks is not compromised. However, it can only be to everyone’s advantage if both banks and businesses can better understand each other’s positions and needs. I was encouraged by the readiness of individual banks and the BBA to commit to participating in the Round Table.

“Through this initiative we can bring about a greater two-way understanding and as a result, an improved flow of funding. This will stimulate more business activity – which is good for everyone. The Ulster Business School is pleased to be able to make this contribution to achieving the goal we all seek – a stronger economy for Northern Ireland.”

As well as seeking to obtain agreement and clarity on what constitutes a ‘valid proposal’ the Round Table will be considering issues such as how risk is assessed, the cost of borrowing, alternative sources of funds and new forms of finance. Concerns about the impact of property related debt on the financing of the core activities of a number of businesses continues to grow and this area will also be addressed.

The move comes on the back of the findings in a Department of Finance and Personnel report that 42% of businesses perceive the willingness of banks to lend to be either ‘worse’ or ‘much worse’, than in 2007 and that when a loan application is refused, no explanation for the refusal was given in one out of three cases.