Sunflower Power And The Next Generation of Ulster Engineers 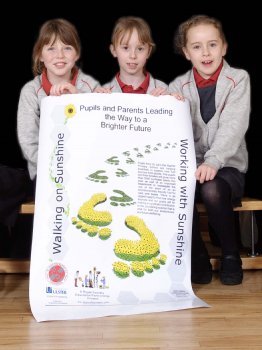 University of Ulster engineers and pupils at a Portadown primary school have teamed up in a search for greener, more sustainable new fuels that could prove vital to our future energy requirements.

Scientists from the Biomolecular Diagnostics and Engineering Group at Ulster’s Jordanstown campus – led by Professor James Davis – and children from St John the Baptist Primary School are involved in a novel research project to investigate the potential of sunflowers as a fuel source.

Primary 4, 5 and 6 children at the school planted sunflower seeds in small pots in their classrooms before the summer break. They then took the plants home and during the school holidays watched them grow in their own gardens.

Seeds from the giant sunflowers – some of them topped six feet tall – have now been collected and are being used by Professor Davis and his research team to assess the effectiveness of new processes for transforming sunflower oil into biofuel.

Professor Davis explains: “The health benefits of cooking with sunflower oil are well known. The challenge facing these aspiring young engineers from Portadown is to see if sunflower oil has potential as an alternative source of fuel. The children have been working with us on a series of experiments – both in their classrooms and in the university’s labs – to assess the efficacy of new processes for transforming the oil into biofuels.”

Looking ahead, he says the children will have an opportunity to record how the sunflower ‘fuel’ produced from the seeds they grew actually performs in road tests.

“This should help drive home the message that not only is biofuel green and sustainable but that it can also be very useful.”

Professor Davis adds that the success of the pilot project in St John the Baptist Primary School means that other schools will now be invited to get involved.

“In Northern Ireland, we’re very dependent on imported fuel for our current heating and transport needs so it was really refreshing to see pupils and their parents being so actively involved in researching solutions for a greener, more sustainable future.”

Cliodhna McCormac, who is a Research Associate in the School of Engineering and former pupil of St John the Baptist Primary School, is Project Manager for the Royal Society funded programme.  She says she was delighted to get a chance to return to her old primary school.

“Although there was plenty of rain during the summer, it would have taken a lot more than that to dampen the children’s enthusiasm for the project. Thanks to their hard work – and a little help from the sun – we’ve now got a bumper crop of seeds to help us assess the value of the new bio-engineering approaches being pioneered at Ulster.”

School principal, Mario Gribben, says it was thanks to Cliodhna’s association with St John the Baptist Primary School that the school was selected for the pilot programme.

“It’s an excellent project which raised awareness about green energy and alternative and sustainable fuel sources. It also got the children thinking about what they’d like to work as when they’re older. I think we might have even nurtured a few engineers!”