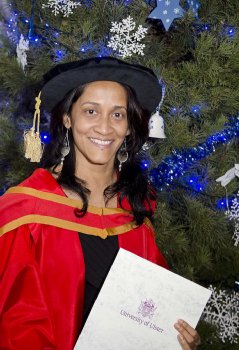 An award winning Sri Lankan writer who investigated the implementation of English medium instruction in secondary schools – a much debated and controversial 2001 language policy reform in her country – has been awarded a PhD at the University of Ulster winter graduations in Coleraine.

Vivimarie VanderPoorten, a lecturer with the Open University of Sri Lanka working in Colombo, says language has been the root of the conflicts in Sri Lanka – most recently the 30 year civil war which ended in 2009 and claimed over an estimated 100,000 lives.

She explains that one of the reasons why the reforms were initially brought about was because it was believed that creating an environment where majority Sinhalese and minority Tamil students could study together  in English – enshrined as a ‘link language’ in the Constitution – would ensure a degree of ethnic harmony.

“The Sri Lankan conflict was related to two groups that were divided along ethnic lines as well as two groups who spoke different languages. Their religions were different too, but there were also some overlaps. For example, Sinhalese (the majority group) as well as Tamils (the minority, which made up the rebel group) were Christians.

“The Sinhalese and Tamils were united in some ways but divided in others: for example, Buddhists used to worship at Hindu temples; there were many mixed marriages during the conflict period; neighbourhoods were not always segregated along ethnic lines; some analysts would claim that this conflict was class-related and that upper class Sinhalese and Tamils were perfectly undivided but it was the working classes, both poorer Tamils as well as Sinhalese that needed to rise up against injustice.”

Vivimarie studied English Literature as an undergraduate in Sri Lanka before completing her Masters/ TESOL (Teaching English to Speakers of Other Languages) at Ulster’s Coleraine campus, graduating with Distinction in 2001.

“As part of the TESOL programme, I took a course titled 'Education for Social Cohesion' at the School of Education at the Coleraine campus because I felt Sri Lankans could benefit from exposure to strategies implemented in Northern Ireland because like Sri Lanka, it was in a post-conflict situation.

“I found my training on the Education for Social Cohesion course particularly useful, and have since shared that knowledge with my colleagues. It opened my eyes to the need to talk about controversial issues in the classroom instead of ignoring them.”

She explains that while she didn’t choose Ulster for her Masters, it was her choice of university for her doctoral studies.

“I studied at Coleraine because I was awarded a scholarship by the World Bank via the TETD (Teacher Education and Teacher Development) project of the Ministry of Education and the project chose the University, not the candidates.”

After Vivimarie returned to Sri Lanka, she was awarded a scholarship for further study and opted to do her PhD as a part time/distance programme, which would allow her to spend some time at a UK university and the rest of her time in Sri Lanka.

“Ulster was my choice for my part time PhD programme because I’d been there before and the fees were within the range of my funding.  I’d also made friends in Northern Ireland which was an added motivation.”

Once enrolled for the PhD, Vivimarie spent three months in Coleraine before going back to Sri Lanka to complete the programme online as a distance learner. Her data collection took place in Sri Lanka. She subsequently made a few return visits to maintain contact with her supervisors, and also to attend her ‘viva’.

Vivimarie has written two volumes of poetry, which have won awards in Sri Lanka and in the South Asian region. Her poetry has also appeared in Spanish and Swedish translation in journals in Sweden and Mexico and in the University of Ulster literary publication, ‘Reflexion’. The books of poetry focused on the devastating civil war, issues of identity and gender, and her personal experiences.

Congratulating Vivimarie on being awarded her PhD, Dr Jackie Reilly, Head of the Research Graduate School, Faculty of Social Sciences, said she is always impressed by the commitment and ability of part time students like Vivemarie to successfully manage to combine their research studies with busy lives - but never more so than when they do so within the Distance Learning Framework. My warmest congratulations to Vivimarie and I am sure her supervisors are also delighted.”

Her First Supervisor, Dr Lesley Abbott, added, 'Vivi was an exemplary doctoral student and proved that the distance relationship with her supervisors, in this challenging academic context, could be eminently successful and mutually beneficial.'