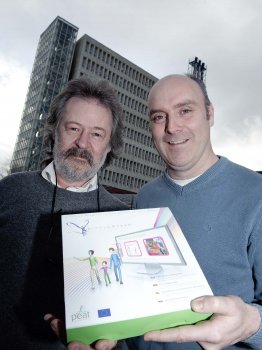 An autism treatment initiative developed by parents and University of Ulster researchers is getting wide European exposure, thanks to Leonardo da Vinci.

'Simple Steps', a  unique multimedia teaching program based on the application of the science of behaviour, – Applied Behaviour Analysis (ABA) – is being translated for use by parents and professionals in the Netherlands, Sweden, Italy and Iceland.

The organisation helping to spread the word the European Commission through its Leonardo da Vinci Programme, which last year also funded the program’s production, distribution and translation into Spanish, Norwegian and German.

When first launched, a thousand copies of the 'Simple Steps' programme were distributed free of charge in the three countries, as well as in the UK.  The teaching pack comprised a comprehensive booklet and a CD-ROM containing instructions and various resources.

In this second phase of the project, the entire program is being put on line (www.simplestepsautism.com), with users enabled to access it in their home language.

Commonly known simply as 'Leonardo', the scheme is a part of the European Commission’s Lifelong Learning Programme. It helps UK organisations of all shapes and sizes to improve training and skills through funded European opportunities.

“Winning Leonardo funding that enables us to launch a second phase of the program’s European roll-out is a huge boost for everyone involved,” said Dr Mickey Keenan, who is Ulster’s lead researcher on the project.

“I see it as another vote of confidence in our work," he said.

'Simple Steps' has been devised by a local charity, PEAT (Parents’ Education as Autism Therapists), in conjunction with a team including Dr Keenan and Dr Stephen Gallagher of Ulster’s School of Psychology.

Ulster is one of only a very few European universities which offer an MSc degree in ABA.  Advocates stress that ABA is not a therapy but, rather, a science which, applied in a holistic way, seeks to create multiple learning opportunities.

Ulster’s researchers say reversing the severe shortage of practitioners in the discipline depends on more universities providing post-graduate degrees in ABA that will qualify practitioners to apply the science to autism spectrum disorders.

Dr Keenan, who is a Fellow of the British Psychological Society and a founder of PEAT, said: “There has been a significant increase in the prevalence rates of Autism Spectrum Disorder worldwide and some studies have found that as many as 12 in every 1,000 children in Europe may have the disorder.

“There are parents out there who are desperate for help. What we are trying to do is to empower them with the tools to help their children.

“Using a variety of multimedia techniques in “Simple Steps”, we are making the science come alive. It gives parents a head start in understanding and exploiting the benefits of ABA. Through it, parents are being taught how to educate their children, and doing it with the backing of the science.

“Significantly, also, this is a good example of a project that has been developed in Northern Ireland by Northern Irish people which is making a growing impact on the rest of Europe.”

The program is part of a wider overall Leonardo-backed project called “STAMPPP”, which is the first of its kind to bring expertise in science-based training in autism to European partner institutions.

Dr Keenan said: “There is a big movement in ABA studies especially in the US and Canada but in Europe there are not sufficient Masters’ degree programmes or university training courses to produce the qualified practitioners..

"Applied Behaviour Analysis has consistently emerged as the most appropriate and effective treatment to help children with autism. However, the number of trained professional behaviour analysts is very low throughout Europe. One of the aims of this project is to address this need for suitably qualified professionals who can design, implement, and monitor programs that address individual needs of children with autism.”

PEAT (www.peatni.org) is a parent-led charity based in Northern Ireland. It promotes the science of ABA for helping children with autism.Autism Spectrum Disorder (ASD), commonly referred to as Autism, is a disability that affects the way a person communicates and relates to people around them.STAMPPP stands for Science and the treatment of autism: A multimedia package for parents and professionals.Leonardo Programme (www.leonardo.org.uk)