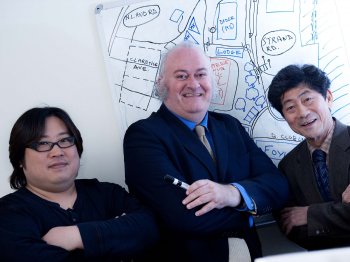 Academics at the University of Ulster's Magee campus had an opportunity to get a first-hand account of the challenges involved in 'machine translation' (MT) from one of the world's leading experts in the field, Professor Katsuyuki Shibata from Japan.

Professor Shibata, Professor of Mathematics and Information Science at Fukuoka University, began his MT research in 1986, developing a system written in the BASIC programming language with 254 lines of code and equipped with a 745-word dictionary.

His MT system translates English text into Japanese and vice-versa in real-time and his universal MT engine can be used for all languages.

Professor Paul Mc Kevitt, who is Professor of Digital Multimedia and a member of the Computer Science Research Institute said: “It was a great honour to have Professor Shibata lecture here. Machine translation is an interdisciplinary field involving theories and algorithms from Arts and Computing. It is one of the Holy Grail applications of Artificial Intelligence.

"We have come a long way from the days when MT systems translated, ‘the spirit is willing, but the flesh is weak’ into ‘the Vodka is good, but the meat is rotten’"!

Professor Shibata’s visit to the Magee campus coincided with Imagine-Create 2011, a bi-annual digital arts festival organised by the University of Ulster in collaboration with other partners in the north west.

The festival programme included an international line-up of talents and minds from the worlds of art, design, new media and software development, making it an ideal showcase event in the lead-in to Londonderry becoming the first UK City of Culture in 2013.