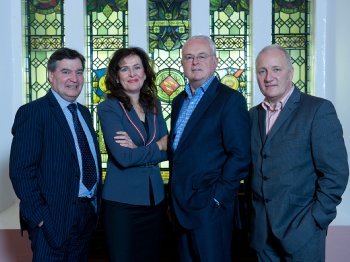 TV broadcaster and charity sector champion Martyn Lewis spoke passionately about the importance of hospices and their community links when he took part in ‘Life Stories, the popular series of public conversations at Magee campus of the University of Ulster.

“We owe it to ourselves, to our families and our children to support the local hospice,” he said. “It is one of the great, great causes.”

Praising the Foyle Hospice, in Londonderry, and the Donegal Hospice, in Letterkenny, he said: “I just think they do fantastic work. What I hear about the hospice in Derry is that it’s got huge support from the local community.”

The audience included Dr Tom McGinley, founder of the Foyle Hospice, who told Dr Lewis that June marks the 25th year of hospice homecare in the North West and 20th anniversary of  inpatient care.  “We are very, very proud of it,” Dr McGinley said. “It has been almost completely community driven – from all sections of the community, from day-one.”

Dr Lewis, who became one of the best known faces on UK television during 32 years as a journalist on BBC and ITN, talked to the ‘Life Stories’ host, Professor Paul Moore, Head of the School of Creative Arts, on Thursday night about a career that is a colourful blend of media, charitable and business worlds.

He was the third guest in the popular series of interviews at Magee with distinguished honorary graduates. Ulster awarded him an honorary Doctor of Letters (DLitt) in 1994 for his services to broadcasting. Dr Lewis was brought up in Portrush and Coleraine and educated at Dalriada School, Ballymoney and Trinity College Dublin.

He is now the European Chairman of a teleconferencing company, Chairman of NICE TV, which works with ITN to deliver high quality news videos. He is Chairman of the National Council of Voluntary Organisations, Vice-President of the three main UK national hospice charities, Chairman of YouthNet and a founding patron of Dementia UK.

Reflecting on a connection with hospices that started in 1983 when he made a ground-breaking video documentary for ITN’s ‘News at Ten’, he said: “When I got involved with the hospice movement, I found myself meeting people with a deep, innate goodness.

“I found it hugely powerful, and for me the voluntary sector became the antidote to the cynicism that you meet in the world of journalism. So it enabled me to live what I consider to be a balanced life.....”

Stressing the need for community support, Dr Lewis said: “Dame Cicely Saunders (a mainspring of the hospice movement) said that no hospice should ever want more than 49% of its funding from government...because, if you do that, the bureaucrats take over. The great thing about a hospice is that it is created by people who see a need within their community, then choose to do something about it and everyone gets together to support it.”

In the wide ranging and engaging conversation, Dr Lewis proposed that journalists covering a negative story – for instance a drug-related crime in south London – should include even a brief reference to what individuals or organisations are doing to tackle the problem at the heart of the negative headline.

His suggestion was a “half-way house” refinement of what became mistakenly known as the  “good news” argument he put forward in 1993 when his ideas were distorted by a few fellow journalists, he said.

It would be a win-win for editors, who would still get a negative headline and the content that they think sells, and viewers and readers “who will not be left with the feeling that the world is going down the plughole”.

“I think that if journalism is to hold up a proper mirror-image to the world, it really has to start acknowledging the success and achievements that can inspire and help people in society to move forward alongside not instead of --which was the distortion -- the quite proper and sceptical coverage of the negative things that are happening as well.”

The balancing factor, or criterion, for commissioning and including stories should be the extent to which they could shape or change the society or environment in which we live.

“What I was arguing, and I still argue, is that when we come to decide the priorities for news stories...., we should be more prepared than I think journalists are to weigh the positive stories about success and achievement on the same scales on which we weigh the negative stories about doom and gloom, death and disaster.”