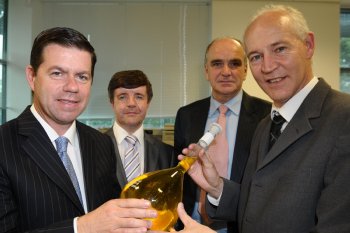 The University of Ulster is at the forefront of solving some of the world’s biggest health problems according to U.S economic envoy to Northern Ireland Declan Kelly who toured Ulster’s world-leading Biomedical Sciences Research Institute (BMSRI).

The BMSRI at Ulster’s Coleraine campus, is one of six research institutes within the Faculty of Life and Health Sciences and was established in October 2004 and since then has been one of the pioneers in research of cancer, diabetes, heart disease and osteoporosis.

Mr Kelly was briefed on the pioneering research taking place in the Institute where researchers investigate the underlying causes, diagnosis, treatment and prevention of human degenerative diseases.

Mr Kelly said: “I think the research institute is very impressive and I am glad I came, because I had no idea of the depth and granularity and the excellence of the work that’s being done here. Most importantly several of the things that are being done here are key to solving several of the world’s biggest problems, including consumption habits, critical illness such as diabetes and Alzheimer’s and different forms of cancer.

“I’m confident after seeing what I have seen today that we have no difficulty identifying a number of companies that may be interested in talking to the University about partnerships potentially down the road.”

The US delegation was given a presentation on the work of the Institute, which is the only biomedical science research unit in the UK university system to achieve the top accolade of 5-stars in each Research Assessment Exercise since 1996.

Mr Kelly continued: “The approach to take is to look at the problem that you are trying to solve first and then applying the science and academic engineering to match it as opposed to the other way round.

“In America right now if you look at the concept of obesity and consumption of foods that may or may not be good for you, people are interested in learning more so that they can be educated and companies are interested in spending money to try and help solve that problem. While right here on this campus you are doing things that are central to that debate. So as one example, I think that’s something that the University could do very well with, in the United States.”

Professor Tony Bjourson, Director of the BMSRI, said that the visit of U.S Secretary of State Hilary Clinton’s Economic Envoy to Northern Ireland could advance the opportunities of the world-renowned research centre:

“The Institute is delighted to have this opportunity to showcase our world-leading research which is of immense importance to Northern Ireland. The BMSRI can use this research to transform our understanding of human biology and pathology by giving us a real understanding of their very complex molecular aspects.”

Across the whole of the University of Ulster, research generated over £29 million for the Northern Ireland economy in 2008/09 academic year and Professor Bjourson said:

“The BMSRI is committed to providing scientific support for the knowledge-intensive, high-added value biotechnological and biomedical industries, which are establishing themselves in Northern Ireland, and which may reasonably be expected to make substantial contributions to economic renewal.

“Prospects in medical products and biotechnology and in the modification of foods to produce more valuable, healthier products, are remarkably promising.”

Researchers in the Institute have had a recent boost in their investigative capabilities with the acquisition on a multi-million pound STED super-resolution microscope, one of the world’s most high powered optical microscopes which can look deep inside living tissues and help unlock some of the secrets of cell migration and tissue development.

This development has been particularly important in ongoing research a team has been conducting in to the possible causes of breast cancer.