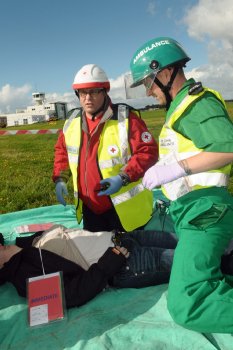 University of Ulster nursing students got the opportunity to put theory into practice when they took part in a mock emergency ‘air disaster’ exercise at the weekend.

The mock air disaster thrust the students in to a real-life scenario of dealing with such an incident. Acting as casualties, or as family and friends of the casualties, nursing students were able to experience the response to such a disaster by emergency, statutory and voluntary services.

The airport runs these types of exercises twice a year to test its emergency plan and ensure procedures run smoothly.
Dr Vidar Melby, a senior lecturer in the School of Nursing, said that the opportunity to get involved with this a project has helped develop students’ knowledge and understanding of real-life disasters.

He said: “We have been involved in these exercises for a number of years and it has been very beneficial to the students experiencing the different challenges that can arise during such a disaster scenario.

“Being on the ground in a situation such as this brings to life for the students a range of critical issues that can arise in a pressured environment, and students learn to appreciate the importance of communication and teamwork. It is hoped that students realize and apply their experiences so that the quality of their patient care is enhanced.

The mock scenario at the airport involved an incident with a plane travelling outbound from City of Derry Airport to the Isle of Man. At the point of takeoff the aircraft suffered a catastrophic hydraulic failure causing the takeoff to be aborted, with the crew losing control of the aircraft and careering off the runway. There was severe damage with the fuel pouring from the plane, but there was no fire. It was at this point that the airport’s emergency plan sprung into action, and so did the Ulster students.

Volunteers from throughout the City also acted as friends and family of the injured, an aspect which the student nurses dealt with by providing information about their relatives and directing them to relevant areas at the airport and Altnagelvin Hospital if necessary.