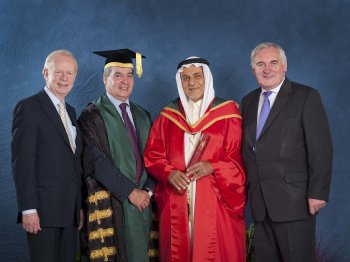 PODCAST: Education has a key role to play in tackling the many challenges facing the world including conflict resolution, HRH Prince Turki bin Faisal Al Saud of Saudi Arabia told students and staff at the University of Ulster today.

As he received an honorary degree from the University at Jordanstown, the Prince told an audience which included Stormont Employment and Learning Minister Sir Reg Empey and former Taoiseach Bertie Ahern of his appreciation of those who had tried to heal intolerance and division in Northern Ireland.

The Prince, who is a nephew of King Abdullah, received a Honorary Doctor of Laws (LLD) for his services to diplomatic and international relations, in particular his efforts to foster better relations between the West and Saudi Arabia, at a special ceremony in Jordanstown.

He also told an audience of academics, business and political leaders and Saudi students he felt privileged to be awarded the accolade from an institution that “has established itself as one of the leading universities in this country, if not the world.”

Outlining Saudi Arabia’s commitment to education, he said every Saudi citizen is entitled to free university tuition and added: “It is the Kingdom’s firm policy that only through education can our people achieve their rightful place in the world and contribute to the betterment of humanity.”

He said: “I pray that God will lead us all to better deal with the challenges that face us today, and education is, assuredly, the most promising means to meet those challenges. “Your experience in dealing with strife and hatred is an example for the rest of us from which to learn. I applaud the people of Northern Ireland for taking on that challenge and defeating ignorance and bigotry.”

The Prince has served as Saudi Ambassador to the UK and Republic of Ireland and later as his nation’s Ambassador to the United States. He is a commissioner of the International Commission on Nuclear Non-Proliferation and Disarmament and has had a key role in promoting greater understanding between different faiths as well as Western and Muslim nations. He worked assiduously to promote strong Saudi-Western relations following the 9-11 attacks.

Sir Reg said: "On behalf of my Department I would like to congratulate HRH Prince Turki Bin Faisal Al Saud on receipt of his degree of Doctor of Laws honoris causa for his services to the diplomatic community and international relations.

"My Department continues to recognise the importance of the internationalisation of higher education, including the development of strategic partnerships and opportunities for international collaboration between the East and the West."

The Prince was introduced to the guests by the Vice-Chancellor Professor Richard Barnett and presented for the degree by Mr Gerry Mallon, chairman of the Council of the University, who delivered the encomium. Mr Mallon described him “as a Royal Prince from the House of Saud who has done much to promote better relations and understanding between the West and the Middle East”.

In his address, the Prince said his country continues to strive to improve the quality of its education. He mapped out the growth of education in Saudi Arabia, contrasting the situation of nearly a century ago when schooling was rudimentary and universities non-existent, with today when the Kingdom has more than 50 universities and a student population at all levels of more than 2.5million (subs: two point five million).

“More than half of the university graduates are women and the largest campus of any women’s university, anywhere, is under construction in Riyadh. It will accommodate more than 50,000 students who will specialise in all the disciplines available to students anywhere in the world.

“On the Red Sea coast of the Kingdom, the King Abdullah University for Science and Technology has started a uniquely innovative experiment in higher education. It is totally dedicated to scientific research, it has partnered with universities from all over the world and its students are all post graduates, with 65 per cent of them non-Saudis: but all are on scholarship. It is the first Saudi university that is fully coeducational.”

Mr Mallon spoke of the wide ranging international work conducted by the Prince and his involvement with a variety of international organisations.

“His Highness is a founding father and member of the Board of Trustees of the King Faisal Foundation – one of the largest philanthropic foundations in the world. Among its activities, it presents an annual King Faisal International Prize to individuals who make a positive difference.

“Also known as the ‘Arab Nobel Prize’, last year’s prize was awarded to Ronald Levy, its first Jewish recipient, for his studies in Medicine.”

HRH Prince Turki's speech to the congregation is available at

1.   HRH Prince Turki bin Faisal Al Saud was born in Makkah, Saudi Arabia in February 1945. He is the youngest son of the late King Faisal by Princess Effat Al-Thuniyyan and is a nephew of the current King Abdullah.

2.    HRH Prince Turki bin Faisal Al Saud was educated at the Taif Model Elementary and Intermediate School, Lawrenceville School in New Jersey, The Edmund A Walsh School of Foreign Service of Georgetown University, where he was a classmate of President Bill Clinton, and studied international law and jurisprudence at Princeton, Cambridge and the University of London.

3.    He was appointed as an advisor at the Saudi Royal Court in 1973 and served a number of years in Saudi Arabia’s General Intelligence Directorate, becoming its Director General in 1979 and serving in that role until shortly before the September 11 attacks in 2001. In this position he had a key role in the military operation to remove hostage-taking terrorists from Masjid-al-Haram (the Sacred Mosque) in Mecca in 1979.

5.    He is a founder and member of the Board of Trustees of the King Faisal Foundation and is a chairman of the King Faisal Centre for Research and Islamic Studies in Riyadh – an independent and not-for-profit organisation promoting and encouraging Islamic heritage and traditions and promoting dialogue and understanding between other religions.

6.    He is a member of the Board of Trustees of the Oxford Centre for Islamic Studies and chairs the board of the Prince Charles Visual Islamic and Traditional Arts Centre and is a co-chair of the C100 Group, an affiliate of the World Economic Forum, which promotes interfaith dialogue and greater understanding between the West and Islamic countries.

7.    HRH Prince Turki bin Faisal Al Saud is also a Visiting Professor of the Centre for Contemporary Arab Studies at Georgetown University, and  a commissioner at the International Commission on Nuclear Non-Proliferation.