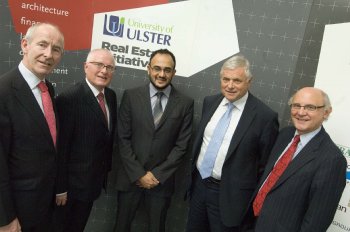 Sustainable development issues are becoming more and more commonplace as Saudi Arabia faces challenges such as rising population and possible energy demand pressures, a Saudi Prince told property experts at a seminar organised by the University of Ulster today.

HRH Prince Faisal bin Turki Al-Faisal, who is chairman Global Strategic Studies Institute (GSSI), which he described as the Kingdom’s first non-governmental independent ‘think and do tank’, was speaking at a seminar organised by the University’s Real Estate Initiative.

“Reform in the built environment sector is key to a sustainable future for cities and towns in Saudi Arabia,” he told academics and key figures in Northern Ireland property at the event held at Titanic House in Belfast’s Titanic Quarter.

“We believe that compact, dense cities with efficient public transport systems and energy efficient buildings are vital to a sustainable urban strategy. We also believe that technologies are not the solution but a tool, and that real solutions can be found in our traditional methods.

“However, the challenge, again, is how to integrate traditional methods of planning and building with new technologies.”

Professor Alastair Adair, Pro-Vice-Chancellor for Communications and External Affairs and a founder of the Real Estate Initiative spoke of the REI’s role. He said it not only conducted in-depth research on property and planning but also sought to have an impact on policy-making.

“We are keen to challenge policy makers in terms of the direction that policy should take. That is even more relevant today in terms of the cuts of that are going to have to be made, when the economy will be repositioned and each government department will be, to use the popular phrase, leaner and fitter.”

The Prince‘s father, HRH Prince Turki bin Faisal Al Saud, received an Honorary Doctor of Laws degree for services to diplomatic and international relations at the University of Ulster on Tuesday.

At Titanic House, Prince Faisal bin Turki Al-Faisal delivered an address in which he analysed issues and challenges that face Saudi Arabia in its quest to be sustainable. The GSSI’s core aim was to bridge the gap between academic research and practice to help progress the environmental agenda, he said. “I very much hope that we can forge a long-term relationship between GSSI and the Real Estate Initative based on common principals of sound sustainable practices.”

With a population of 27.1 million, of whom 30 per cent are expats, population growth is putting a great deal of pressure on the housing sector, the Prince said. “While the current number of homes stands at 4.6 million, Saudi Arabia will need one million more homes over the next five years to cope with this growth.”

He added: “This may surprise a lot of you to hear that an oil producing country may face energy shortage problems in future. However, with population growth predicted to remain at over 3per cent between 2010 to 2020, a great deal of pressure will be placed on the electricity infrastructure networks.”

He said the Kingdom needed to identify and develop a unified energy policy that would include both conventional sources such as oil as well as renewable energy sectors. “This unified policy would enable decision makers to set up a balanced and long term subsidy strategy for each energy sector.”