From Manchester to Magee via Cairo

Ibrahim Elshamy pictured with  Nobel laureate Professor John Hume THE CONTRAST between  the old and the new at the Magee campus was just one of the things to impress American student, Ibrahim Elshamy when he arrived at the University of Ulster last month on a year long study scholarship.

From Manchester to Magee via Cairo 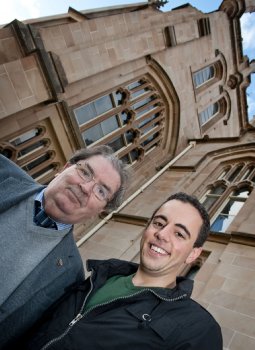 THE CONTRAST between  the old and the new at the Magee campus was just one of the things to impress American student, Ibrahim Elshamy when he arrived at the University of Ulster last month on a year long study scholarship.

“Sometimes people are so determined to build for the future that they almost overlook their past. Some beautiful old buildings have been retained at the Magee campus – but not at the expense of moving forward. The result is very impressive,” he says.

With the Magee campus just a short walk from the city centre, Ibrahim, who is originally from Manchester, New Hampshire, has been taking advantage of the recent fine autumnal weather to learn more about the city’s history.

The compact nature of the Derry Walls and the way they encompass much of the city’s history from so many different perspectives is something else that has impressed him.

“Walking around the Walls is a great way to soak up the history and get a real feel for the place.”

Ibrahim is one of this year’s nine recipients of the prestigious George J Mitchell Scholarships. The Mitchell Scholarships – one of the most competitive fellowship programs in the US – are named after Senator George Mitchell who played a pivotal role in the Northern Ireland peace process during the Clinton presidency.

They fund one year of postgraduate study in Ireland and are awarded annually to US students who exhibit the highest standards of academic excellence, leadership, and community service.

Ibrahim’s first visit to Ireland marks another first for him – his first time away from New Hampshire for the ‘Fall’.

Although he admits to being slightly biased – Ibrahim says the spectacular colours of autumn trees in New Hampshire are hard to beat – he is keeping an open mind and is looking forward to exploring more of what the north west and the rest of Ireland has to offer. With the eight other Mitchell Scholars now well settled at other universities throughout Ireland, he’ll have plenty of opportunities to do some sightseeing.

Ironically, Ibrahim made his first trip to Dublin the same day Bill Clinton visited the Magee campus – but luck was on his side as the Mitchell Scholars were special guests at a reception at the American embassy in Dublin that evening, and he was able to see the former US President speak at University College Dublin the next day.

Ibrahim is a graduate of Dartmouth College, an Ivy League college and one of the best-regarded in the US. Although still in his early twenties, he has an impressive CV and track record in community work.

He volunteered with underprivileged communities in both the US and the Middle East. In 2008, he spent five months in Cairo as a volunteer worker with STAR (Student Action for Refugees) and he worked with the Inner City Muslim Action Network, a community organization in Chicago's South Side that provides legal aid and education for deprived communities.

He was also Student Director of the Tucker Foundation and was directly involved in several major relief projects following the devastation caused by Hurricane Katrina.

A double major in Asian and Middle Eastern Studies and Native American Studies, Ibrahim has signed on for a Masters degree in Peace and Conflict Studies at Magee. The programme has an excellent reputation internationally and is delivered by the Faculty of Arts in collaboration with INCORE, the United Nations International Conflict Centre at Magee.

He is looking forward to the learning more about the Northern Ireland peace process and how lessons from here could be applied to other conflict situations around the world.

Ibrahim hopes that by studying at the University of Ulster, he will have many opportunities to meet people from a wide variety of backgrounds. This in turn will contribute to a better understanding of the peace process and how lessons from here could be applied elsewhere.

“There are many parallels between different conflicts around the world. Increasingly community building and education are being seen as the building blocks for a sustainable peace process. The successful Northern Ireland peace process is an inspiring example to me of a divided society that was able to work together to overcome conflict and violence and create a brighter future.”

The relevance of storytelling and its role in conflict resolution is one area that Ibrahim is particularly interested to explore during his time at Magee.

“When I worked with community groups in Chicago's South Side, one of the most deprived areas of the city and also in Cairo, I was really impressed by the power of storytelling and how it can be used to raise awareness of some of the issues people living in the local community have to deal with.

“Storytelling is one way of finding out what is going on at a local level and what needs to be done to help improve their lives and communities.”

The Mitchell Scholarship is the latest accolade for Ibrahim. He is a former recipient of the Dean’s prize at Dartmouth – awarded annually to the senior who contributes most significantly to the quality of life on campus.

He was also named a Harry S Truman Scholar and received the Benjamin A Gilman International Scholarship and a Mellon Mays Foundations Fellowship.