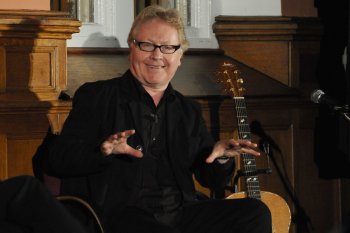 Paul Brady took lifetime fans on an intimate ramble across his successes, stresses and stimuli in music last night in the first of ‘Life Stories’, a University of Ulster series of public conversations with distinguished alumni at the Magee campus.

Around 200 friends and followers filled the historic Great Hall to hear him chart a musical odyssey spanning five decades that has confirmed him as one of Ireland’s most original and popular performers across many genres.

The singer, song-writer, known for his distinctive sound and ground-breaking collaborations with top contemporary artistes, mixed banter with insightful reflections for more than hour before rounding off the night singing “Smile”, to his own acoustic guitar accompaniment. He got a standing ovation.

‘Life Stories’ features well-known Ulster graduates and honorary graduates in a range of fields, particularly arts and cultural areas, in conversation with University academic and broadcaster Paul Moore. The one-to-one discussions will offer audiences a rare opportunity to hear a personal account of the life and achievements of each guest.

Brady was awarded an honorary Doctor of Letters (DLitt) degree last year in recognition of his services to traditional Irish music and song-writing. A household name in Ireland, he has won international acclaim. His songs have been recorded by artists included Santana, Garth Brooks and Tina Turner.

Professor Moore, who is Head of the School of Creative Arts, said the University was honoured to have Paul Brady as the inaugural guest in the ‘Life Stories’. It was an opportunity “to explore the man and the music”, the formative influences that had a bearing on his progression in the music industry and the creative impulses underlying his work.

He added: “ ‘Life Stories’ will feature examples of the participant’s work and will discuss landmark developments in their career, the high and lows of their working life, as well as their views, outlook and plans for their future.”

Professor Deirdre Heenan, Dean of Academic Development and Acting Provost,  said ‘Life Stories’ marked the latest new chapter in the University’s long record as one the North West’s chief promoters and exponents of the  creative arts and entertainment.

“‘Life Stories’ is a platform for distinguished alumni to share their life experiences with a wider audience and, I hope, to enthuse fledgling talent among a new generation,” she added.

The Vice-Chancellor, Professor Richard Barnett, who presented Brady with a book on Tory Island by Jim Hunter of the University of Ulster, hailed the Strabane-born artiste as one of the most innovative of his generation. Professor Barnett said future guests would include the writer Seamus Deane and lawyer Michael Mansfield.

Last night’s conversation was interspersed with screened clips of some of Brady’s best-known songs, followed by searching questions from Professor Moore.  They ranged from his upbringing in Strabane, Co Tyrone, to when “you found your voice” in releasing a solo folk album in 1978 and branching out into his own writing style with his album “Hard Station” three years later, and also his views on the contemporary music industry.

Brady spoke of his childhood, schooling and early musical tastes and a wealth of experience that has helped shape his approach to performance, composition and lyric-writing. He struck a chord with many in his North-West audience when he said that he came from “a musical house”, and spoke affectionately of his parents’ influence and his father’s gift for monologues and music.

He recalled the excitement of hearing skiffle as a child, and Lonnie Donegan singing ‘Cumberland Gap’, and how at school and university music had acted as his refuge. “More and more I was happy living in a musical world, in my own head.”

He recounted his experience with The Johnstons and Planxty, and how the haunting magical sound of Gerry Rafferty’s “Baker Street” helped impel him towards writing and finally recording his own songs.

He also touched on the dark times of The Troubles and how he struggled, even in the final moments in the recording studio, to complete the lyric to his iconic “The Island”, a song which he said posed questions rather than generated answers.

Brady, who disclosed that he has an interest in nature, in photography, scuba diving, and – to obvious audience surprise - gardening,  said he is now a more contented man than when he first started out ‘on the road’. 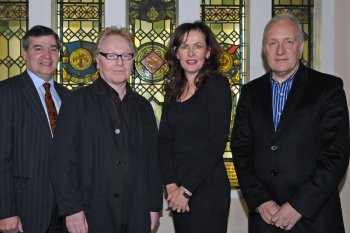