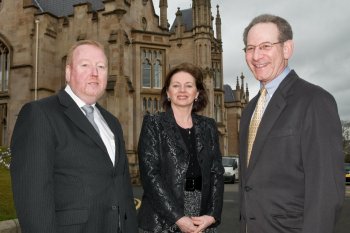 A Harvard University professor who taught Barack Obama has told University of Ulster students that the US President is a powerful persuader in the mould of Abraham Lincoln.

Professor Gary Orren, one of the USA’s leading authorities on communication, said Obama puts into practice influencing skills that Lincoln cultivated all his life. Both were “students of persuasion”.

“The Number One principle is - know your audience. You will virtually never persuade somebody to your view unless they believe that you understand the issue from their point of view,” he said, delivering a guest master class hosted by the Ulster Business School at the Magee campus.

Professor Dolores O’Reilly, Head of the Department of International Business, described Professor Orren as an outstanding expert in strategy and communication and said his visit to Magee represented a further valuable link with Harvard that the campus and University would hope to build upon.

Professor Orren, who teaches at Kennedy School of Government at Harvard, was speaking about “Strategies of Persuasion” to students and staff in International Business.

Obama, like Lincoln before him, assiduously practises the skills of persuasion, he said, such as empathy, respect for those with whom he disagrees and ability to tell a story that illustrates the human impact of dry statistics. That is why he is such a powerful advocate for his beliefs, he said.

“Abraham Lincoln was a master persuader. He was the most persuasive figure in American political history, by far. And he was a student of persuasion. They very principles that I am talking about today, he cultivated them.

“I think that one of the reasons Barack Obama likes Abraham Lincoln, and why Lincoln is an idol, is because Lincoln was a consummate student of persuasion.”

Larry McCurry, a senior lecturer in International Business at Magee who introduced Professor Orren to the audience, was one of his students at Harvard. He spoke of Professor Orren’s expertise as an opinion poll analyst and political commentator and said he had served on the national political party commissions that drafted the rules for the U.S. presidential nomination process.

Professor Orren is a Professor Public Policy and Management and also teaches at Oxford University. He has written widely on public opinion, politics and persuasion and advises government agencies, non-profit organisations and corporations throughout the world on strategy and communications.

He explained that the time-honoured building blocks of a persuasive message include -- knowing your audience, keeping your message simple and telling a graphic story that puts flesh on data.

“Before you start your conversation or make your speech or your memo, you should harness these principles as tools to deliver your message rather than just using them in a non-strategic, random manner. They are common sense but unfortunately they are just not common practice.”