Students Step Up to the International Biology Olympiad 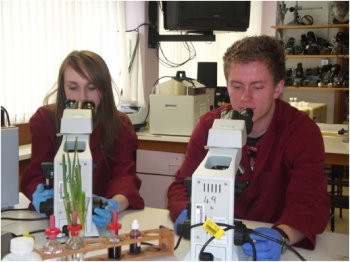 TWO OF Northern Ireland’s top biology students are preparing to travel to South Korea to compete in the 2010 International Biology Olympiad (IBO).

Liam and Emma will be travelling to Changwon City to compete at the prestigious IBO, alongside team mates from the Republic of Ireland.

They will face tough competition from teams representing 70 other countries from around the world.

The International Biology Olympiad has been running on an annual basis for 20 years and provides a platform for the most talented Biology students to expand and develop their skills for future careers.

"I am confident that Liam and Emma will be excellent ambassadors both for the Step-Up programme and for Northern Ireland when they compete at the esteemed International Biology Olympiad competition.”

Step-Up aims to provide opportunities for talented young people who would not have traditionally considered studying at higher education institutions.

The programme has been operating successfully for ten years and works in partnership with schools, government agencies, hospitals and local industry.