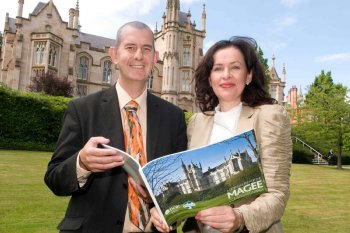 ENVIRONMENT MINISTER Edwin Poots MLA has praised University of Ulster conservation at Magee and says expansion plans for the campus represent “an exceptional opportunity” for citywide educational and economic growth.

The Minister was in Londonderry to launch a new advisory design guide about the'Magee Conservation Area' in the city.

Professor Deirdre Heenan, Dean of Academic Development at Magee, assured the Minister that the University would continue to have conservation as a guiding principle in future development.

“As custodian of some of Derry’s finest historic buildings, the University takes very seriously its responsibility to ensure its developments were in sympathy with the needs of the surrounding area as well as its on campus educational provision.

She added: “We have an ambitious plan to develop this campus. We have secured an option to acquire 30 acres that are currently held by Foyle and Londonderry College. I take this opportunity to assure you that when we acquire this land, we will ensure that the development is sympathetic. We will take account of the history of this site – and we will make sure the development is pleasing for everybody in the neighbourhood.”

New University of Ulster developments on the former Foyle and Londonderry College site would, said Professor Heenan, enshrine the sympathetic heritage design approach that had been a hallmark of Magee’s current campus blend of historic buildings and vibrant modern structures.

Her comments coincided with news that the Education Minister Caitriona Ruane has given approval in principle to Foyle and Londonderry’s plan to build new premises in Clooney, paving the way for the University to exercise its option to acquire the school’s 30 acre site at Northland Road.

Mr Poots, on arrival at the Magee campus, told Professor Heenan: “The further development of the Magee campus on the lands currently occupied by Foyle and Londonderry College affords an exceptional opportunity to further enhance third level education supporting the social and economic fabric of the city.”

The Magee campus is the centrepiece of the conservation area, which also includes surrounding residential districts. Residents, conservationist lobby groups, architects and represents of the DoE Planning Service were among the guests of launch of the new guide in the Great Hall of Magee.

Mr Poots said the Magee Conservation Area had “a distinctive sense of place” in a city that was emerging from a chequered past which had witnessed the worst and best of times. The Area, with its red-brick streets, mature trees and open spaces and Magee campus at its heart was a vital asset to the city.

“The location of the University of Ulster has undoubtedly helped to secure the future of so many of the area’s historic listed buildings,” the Minister told his audience. “I want to commend the University authorities for the role that they have played over the years in maintaining the quality of this area.

“It is important to remember that conservation areas are not just museum pieces. They need to be living and dynamic areas, and in this context the University is to be congratulated in that, as part of its expansion, we have also seen the introduction of some new, and indeed modern, buildings set within the historic landscape.

“These include the Learning Resource Centre on Northland Road, the award-winning triangular pavilions built within the grounds of the former Aberfoyle House and the terracotta buildings along the Strand Road."

Urging residents, property developers and investors to study the Guide, he said: “We must be determined to seize the moment and raise the bar in order to achieve higher quality conservation and design approaches which will both conserve and embrace the unique character and appearance of the Magee Conservation Area.”