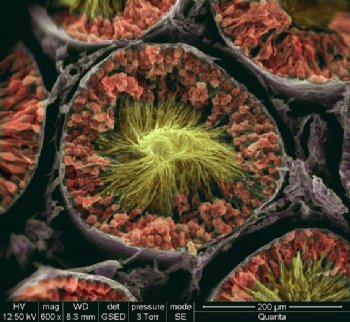 University of Ulster scientist Dr Clifford Barnes has been named as the winner of a prestigious international science imaging competition.

The FEI Company, a leading supplier of microscopes and other tools for the nanoscience market, awarded Dr Barnes’s image ‘Spaghetti Junction’ the winning entry in the 2010 international scientific imaging competition.

The microscopic image of a rat Seminiferous Tubule, which is found in the rodent’s testes, was taken with a Quanta 200 Environmental Scanning Electron Microscope housed at Ulster’s Bioimaging facility at the Coleraine campus, and won Dr Barnes two round trip airline tickets to any destination in the world.

Dr Barnes, a Research Associate in the Biomedical Sciences Research Institute, said: “It was a big shock to learn that I had won the grand prize in FEI Company’s competition this year. There were over 250 entries so it was a very special achievement for me. My fiancÃ©e has already been planning where we should travel to using the airline tickets.

“The worldwide publicity generated by this competition could well attract more outside scientists to the core facility at Coleraine and add to the European Reference Laboratory status we already enjoy.

“Few institutions are as well equipped as our Centre for Molecular Biosciences  in terms of high resolution electron microscopes and super resolution fluorescence microscopy. I would like to especially thank Dr Elizabeth Peachey for providing the sample used as the image was taken as part of Dr Peachey's work during her PhD research.”

The winning image was selected by popular vote on the Flickr photo sharing website before going into the overall prize stage where the winner was selected by voting on FEI’s website and text voting at the Microscopy and Microanalysis meeting held in Portland Oregon, USA.

The FEI company is a leading supplier of microscopes and other tools for the nanoscience market throughout the world and this is the first year of this competition.