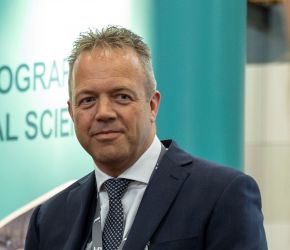 Professor Derek Jackson, from the School of Geography and Environmental Sciences at Ulster University, was admitted to the Royal Irish Academy during a formal Admittance Ceremony, delivered remotely on 21st May.

He was among a small but elite group of only 27 new members for 2021 who were elected for their exceptional contribution to the sciences, humanities and social sciences as well as to public service. These members, alongside existing members, are considered to be Ireland’s world-class researchers.

Derek Jackson is an internationally-renowned coastal geographer (geomorphologist) and a professor of Coastal Geomorphology at Ulster University. He has made major research advances in a number of interdisciplinary fields within the broader theme of coastal oceanography. He is a leading international expert in beach and dune systems, coastal storm impacts and longer-term environmental system dynamics, publishing extensively in these fields. His work focusses on dynamic coastal landscape change due to marine (wave) erosion and build-up.

A highly distinguished scholar in his field, Professor Jackson has also been exemplary in his mentorship and training of young scientists, successfully supervising to completion multiple PhD and Masters students and over 20 postdoctoral staff.

Helene McNulty, Professor of Nutritional Science at Ulster University and Member of the Royal Irish Academy, who nominated Professor Jackson for membership of the RIA, commented:

“This is a great achievement for Derek personally and for the University. Membership of the Royal Irish Academy is the most prestigious and highest academic honour in Ireland. I want to congratulate Derek on his election as Member of the Academy.

Derek is a world leading expert in Coastal Geomorphology and has published extensively in this discipline. His latest achievement is richly deserved and yet another testament to the significance and continuous impact of his work, not just across the scientific field but for society as a whole."

Tim Brundle, Director of Research and Impact at the University, added:

"I am delighted for Derek and want to offer him my sincere congratulations. I'm delighted his stellar work and contribution has been recognised as world leading. We hold ourselves to the highest standard for research at Ulster University aiming to continuously push boundaries in knowledge, drive progress and solve the biggest challenges we face as a society. Derek has shown time and time again that his work embodies this ethos, and I can’t wait to see what’s next."

"It's an honour and absolute privilege to be elected a member of the Royal Irish Academy. The study of geoscience in a climatically changing world, impacts all our lives particularly within coastal and marine environments, and I look forward to joining the membership of distinguished scholars to progress the Academy's mission, champion academic research and promote awareness of how science can enrich our lives right across society. Definitely, a moment I will not forget."

“These 27 new Members are recognised for their scholarly achievements, typically reflecting many years of research, or for significant contributions to Irish society. They bring international academic distinction to our country and we should be immensely proud of these remarkable women and men. As Members of the Academy, they will strengthen our capacity to provide expert advice on Higher Education and Research policy.”

The Academy has been honouring Ireland’s leading contributors to the world of learning since its establishment in 1785. Past Members have included Maria Edgeworth, a pioneer of the modern novel and Nobel laureates: WB Yeats; Ernest Walton, Erwin Schrödinger and Seamus Heaney.