Ulster University graduate turns his passion for tennis into a business 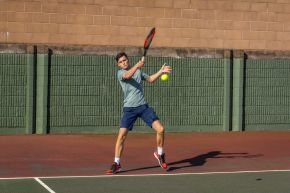 Furloughed during his placement year, Tom was initially glad of the extra free time but after seeing the rest of his family working tirelessly in the healthcare sector throughout the pandemic he was motivated to find something purposeful to do.

A gifted tennis player, Tom was awarded an Ulster University Talented Athlete scholarship in 2017. He has competed all around Ireland and won the Varsities Bowl competition in his first year. He decided to put his talent to good use and undertake a coaching qualification before setting up his own coaching business.

“I wrote out my business plan on a beach in the Dingle Peninsula, Co. Kerry. The aim was to provide tennis and fitness coaching in South Down to all ages in a simplified manner that is easy and fun as many people have the misconception that tennis is overly complicated and technical. I wanted to reinvent the image of the sport in my area.”

Tom spread the word about his business via social media, flyers and his website and was delighted at the response from his local community,

“I was really impressed at the uptake and interest as tennis in South Down is a particular tough sell, Gaelic is the bread and butter of our community here. I began coaching in Warrenpoint and Rostrevor using both council and private courts. I have also been offered the opportunity to coach through the Everybody Back Active programme supported by Newry and Mourne district council in the new, state of the art tennis courts in Newry Dome as soon as restrictions ease. I received a lot of positive feedback on my promotional videos which allowed me to increase my reach and teach more people my passion.”

The ongoing COVID-19 pandemic forced Tom to press pause on his business,

“I had to shut things down with the pandemic which was very tough, however I began volunteering at a vaccination centre in Newry and I poured my energy into my other interests such as listening to countless hours of Jimi Hendrix and Led Zeppelin and creating a garage rockband, along with the odd bit of revising for finals…”

Tom is acutely aware of the impact of the pandemic on healthcare sector staff and has offered special discounts for those in sector to try something new and get active. For him, tennis has always been a way to escape from all of life’s stresses and he wants to share that with as many people as possible.

Starting his own business has forced Tom out of his comfort zone and he has grown in confidence,

“My job forces me to go out and meet new people every day, to interact and teach them something they don’t know. I can be standing in front of a group of people who have 30 years difference in age between me and them and I need to enhance their game by teaching them something new. I initially found this tough, but I knew nothing easy comes from comfort zones, I currently teach kids, teens and adults from all walks of life and with this my public speaking has come on, at least on the tennis court.”

Tom attributes he success to his experience at Ulster University,

“The skills and guidance I have picked up at Ulster will last me a lifetime. I have had the opportunity to seek advice from career advisers and have been supported by lecturers working around the clock to answer all my queries, no matter how numerous.”

Tom is stepping further out of his comfort zone this September, moving to Italy to study a Masters in International Business at the Universita Cattolica Del Sacro Cuore in Milan. There he hopes to further develop his business skills, meet new people and create an international network.