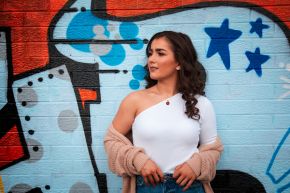 The Ulster University Magee campus is getting behind local Drama student, Brooke Scullion as she prepares for the Knockouts round of ITV’s The Voice on Saturday 21 March 2020.

Brooke, a Bellaghy-native and a final year drama student at Magee has wowed audiences of millions and a panel of super-star judges to make it to the Knockout round of the hit-show.

“We are all rooting for Brooke as she prepares for the Knockout stages of The Voice UK. Brooke is a final year Drama student at Ulster University. A singer, a songwriter and an actress, she is an inspiration to us all. Brooke will have the good wishes of everyone at Magee as she knocks them out at the next stage of the competition”.

Just recently Brooke became a TikTok sensation amassing over 5 million views when she finished out the lyrics of the popular song, A Star is Born, when stopped on campus by a friend.

Brave Brooke was the first contestant on the first episode of the new series of The Voice. Performing a cover version of Lewis Capaldi’s Bruises, Brooke has had a whirlwind journey on the show. She has wowed the coaches including Olly Murs, Will.i.am, Tom Jones and Grammy award-winning Meghan Trainor who mentors Brooke. A member of the Wolfe Tones Baile Eachaidh GAC, Brooke has had huge support from her two Grannies, Peggy and Sheila and her family and friends.

Putting her degree into practice, Brooke has performed as an extra in many popular shows filmed in Northern Ireland including Game of Throne and Derry Girls.

The Northern Irish singer/songwriter’s next step on The Voice is to take part in the Knockout stage where she will compete for a spot on the Live semi-finals.