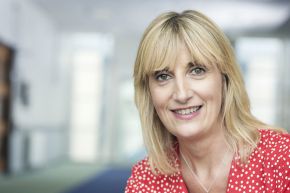 Ulster University Professor Sonja McIlfatrick has been awarded a Fellowship by the Royal College of Nursing (RCN).

Head of the School of Nursing at Ulster University, Professor McIlfatrick is a leading clinician with over twenty years’ experience in nursing and palliative care practice, education and research.

The RCN elects a small number of new Fellows and Honorary Fellows each year, accolades that recognise practitioners, researchers, educationalists and leaders who share the College’s commitment to advancing the art and science of nursing and the improvement of health care.

Professor McIlfatrick is the only RCN member from Northern Ireland to receive the Fellowship this year.

She has secured substantial research funding and produced highly cited papers with over 1,200 citations since 2014, underlining the high esteem with which she is held in her field.

From 2014 to 2017, Professor McIlfatrick was Head of Research for the All Ireland Institute of Hospice and Palliative Care, during which time she led the establishment of the All Ireland Palliative Care Research Network. She is also is an honorary fellow of the Royal College of Surgeons in Ireland, a UK Florence Nightingale Leadership Scholar and a member of the research advisory committee for the Council of Deans for Health, UK.

Professor McIlfatrick has also been influential on the international stage, as a member of the Board of the European Association of Palliative Care, and holds visiting professor appointments in Slovenia, Japan and Australia.

Most recently, she has held the presidency of INDEN (the International Network for Doctoral Education in Nursing), a role that has earned her substantial international recognition in the United States of America, the Far East and in the Southern Hemisphere.

“I am delighted and proud to have been awarded this honourable title from the Royal College of Nursing. I am passionate about nursing research and education, with a particular interest in improving palliative and end of life care. Over the years, I have been keen to promote and recognise the value of nursing contribution and so it is hugely rewarding to have been recognised by my industry peers.”

Take your desire to care for people and learn to nurse in a compassionate and respectful way that promotes dignity and wellbeing.