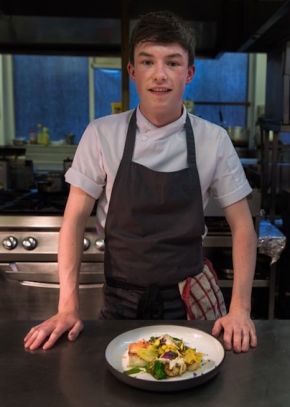 Ballyclare man Callum Irwin has added a first class honours degree from Ulster University in Culinary Arts Management to his recent list of accolades which include winner of Féile Masterchef, winner of 25th Anniversary celebrity dinner at the Michelin Starred The Fat Duck in Berkshire and playing a role in helping the Muddlers Club Belfast secure its first Michelin Star.

The former Ballyclare Grammar School student joined Ulster University in 2016 pursuing his love for food and cooking with a degree in Culinary Arts Management at the Department of Tourism and Hospitality. Self-confessed foodie Callum spent his childhood cooking in the kitchen with his grandmother from the age of three and enjoyed making homemade bread and fresh pasta before enjoying shifts as a kitchen porter from the age of 13 and a dessert chef from the age of 14 at Ballyclare Golf Club.

While studying at Ulster University Callum secured a work placement as chef de partie in The Muddlers Club Belfast. Although the restaurant closed during the COVID-19 pandemic lockdown, Callum used his creative foodie flair to create a dine at home concept, his menus focused on locally sourced seasonal produce prepared in a way that diners can eat high quality restaurant style food at home. Alongside, consultancy work for a newly devolved business providing meal plans of under 500 calories to people’s doors across Ireland. Callum has now set his sights on creating Michelin star food for the rich and famous on-board super yachts before returning to open his own restaurant in Belfast.

Reflecting on his success, Callum commented:

"Choosing to study Culinary Arts Management at Ulster after leaving school felt like the perfect fit as it combined my passion for food along with real world experience to help me achieve my life ambitions. At times I look back and I wonder how I managed working full time in a Michelin starred restaurant and working on my final year studies which included my future business plan but I’m so glad I did as it helped me secure a first class honours degree that I know will lay a fantastic foundation for me to progress from.”

Ulster’s Hospitality, Leisure and Tourism courses have been ranked first out of 54 higher education institutions in the UK in the latest Complete University Guide 2021, up three places on last year.

For more information on studying at Ulster visit: https://www.ulster.ac.uk/courses/202021/culinary-arts-management-19208

Develop the culinary skills and management knowledge necessary for a vibrant global career.

Develop the culinary skills and management knowledge necessary for a vibrant global career.