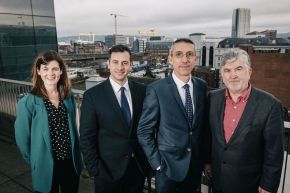 Ulster University researchers from the Hydrogen Safety Engineering and Research Centre (HySAFER) are coordinating HyResponder, a European project which will develop and implement a sustainable “train the trainer” programme in hydrogen safety for first responders throughout Europe.

The €1m European project, Funded by Fuel Cell and Hydrogen Joint Undertaking (FCH 2 JU) under Horizon 2020, will support the commercialisation of fuel cell and hydrogen technologies by training responders, who are involved in both the permitting process and in tackling accidents with hydrogen transport and infrastructure. The project will underpin the improvement of resilience and preparedness through enhanced emergency planning, intervention tactics and strategy and in ensuring appropriate accident management and recovery.

Hydrogen has been used safely in industry for many years. However, it is important to understand how its properties differ from conventional fuels. In the event of an incident it is often firefighters who are first on the scene, HyResponder will provide hydrogen specific safety training and European wide guidance for responders.

Coordinated by Ulster University senior lecturer Dr Sile Brennan, the three-year project will develop operational and educational training (including virtual reality) in hydrogen safety for first responders and establish a Pan-European network of responder trainers. Trainers from at least 10 different European countries will attend a bespoke course in hydrogen safety and transmit that knowledge back to their home countries.

This work will inform the European Emergency Response Guide (ERG) and will incorporate state of the art intervention strategies and tactics which will be used to aid first responders involved in hydrogen incidents  across the globe.

“We are delighted to coordinate this exciting European project which has the potential to make a life-changing impact to first responders across Europe. Ulster University’s Hydrogen Safety Engineering and Research Centre (HySAFER) is at the forefront of hydrogen and cell technology safety research. The team focuses on the development of breakthrough safety strategies and innovative engineering solutions for hydrogen and other industries to underpin public safety.

“This collaborative project will see academics and safety experts work directly with fire and rescue services and the relevant professional bodies across Europe to inform and empower first responders to carry out their jobs safely.”

“FCH JU aims - both at programme and at project level - to ensure that hydrogen safety is adequately managed, and to promote and disseminate H2 safety culture within and outside of the FCH 2 JU programme…. That is why projects such as HyResponder are extremely important."

The three year project builds on the HyResponse project which established the world’s first comprehensive training programme for first responders to hydrogen incidents. HyResponse concluded in 2016 and was coordinated by The French National Fire Officers Academy (ENSOSP). ENSOSP are key partners in HyResponder, leading on operational training design and delivery.

“The French National Fire Officers Academy excited to build on the work of our successful HyResponse project through this new innovative project. We will be putting our purpose built, unique training facility in hydrogen safety for firefighters to good use, training teams of first responder trainers from across Europe and beyond. Teams from 10 European countries, along with representatives from North America and Japan will attend training at our centre.”

Project partners attended a kick off meeting at Ulster University’s Belfast campus this week and were joined by Alberto Garcia Hombrados from the European Commission.