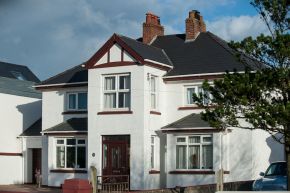 Ulster University’s latest Quarterly House Price Index report indicates a confident market with continued annual and quarterly price increases, with all but the apartment sector seeing a rise in prices over the quarter, supported by diminished concerns for a cliff-edge, no-deal Brexit.

Analysing the performance of the Northern Ireland housing market between October and December 2019, the report reveals an overall average house price of £178,800 which represents a nominal weighted level of growth of 7.8% between Q4 2018 and Q4 2019.

When considering the quarterly movements, the index displays an increase of 2.8% relative to the third quarter of 2019.

The headline average price figures for properties transacting in the last quarter of 2019 were the highest measured by this survey for some time, bringing the overall index, at 638.36 in Q4 (by comparison with the 1984 base of 100), to a level not seen since the end of 2008.

The perception of many agents that the first time buyer market had dwindled, particularly in the higher-priced markets in Belfast and surrounding areas, was substantiated with the proportion of properties transacting at £150,000 or less across Northern Ireland as a whole standing at 50% in the final quarter of 2019, having declined steadily from almost three quarters (74%) in the latter half of 2013.

Market observations also point to the decisive outcome of the UK general election and subsequent movement on Brexit to have, at least, provided some clarity on the general direction of travel.  However, uncertainty continues to surround a number of key issues for the market, notably future trading arrangements which remains a significant challenge for local businesses and the wider economy.

At a local level, the return to devolved government and publication of the New Decade, New Approach deal paves the way for legislation and policy development to address a range of issues that have become increasingly pressing for Northern Ireland over the last three years, notably the extension of bedroom tax mitigation and reclassification of housing associations (so that new social housing provision and the work of the Co-Ownership scheme can be maintained).

"With the report showing average house prices to be at their highest level since 2008, there is much to be positive about for 2020 and beyond.  The market has shown resilience in the face of external economic and geopolitical challenges, and as we establish more stable government at both local and UK level, we can be optimistic about continued growth.

“Of course, there are still real challenges in relation to Brexit and trade negotiation outcomes for the longer term, however, Stormont’s return and the UK’s formal EU exit has at least alleviated some of the uncertainty we’ve experienced over the past three years.”

While Q4 2019 was very fluid both economically and politically at a national level, the passing of October 31st without a cliff edge Brexit and the signing of the UK EU withdrawal agreement provided much needed stability at a local level.

To build on the confidence and affordability within the market and maintain sustainable growth levels in 2020, further milestones such as the upcoming trade negotiations between the UK and the EU and the all-important ease of flow of goods and services for Northern Ireland businesses, needs to be carefully navigated.

“The latest figures produced by Ulster University and the feedback from estate agents both indicate ongoing demand within the housing market.  Following the UK general election, the UK’s departure from the EU last month and the return of devolved government in Northern Ireland, some of the wider uncertainty influencing buyer and seller sentiment has been addressed, at least in the short term.  There is no reason to expect an early downturn in demand and we will continue to monitor affordability indicators and market trends in the coming year.”