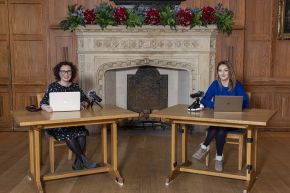 A new five-episode podcast series exploring the history and stories of criminal and deviant Irish women in North America from 1838-1918 has been launched by Queen's University Belfast and Ulster University.

Featuring Siobhán McSweeney, who plays Sister Michael in Derry Girls, the podcast episodes look at different aspects of life for Irish women who emigrated to North America in the 1800s and through to the early twentieth century, including alcohol, poverty, pregnancy and motherhood outside marriage, and sex work. The final episode features those few Irish women who were convicted of murder, one of whom, Lizzie Halliday from Co. Antrim, who was dubbed 'the worst woman on earth' for her crimes.

The ‘Bad Bridget' podcast is based on the Arts and Humanities Research Council funded project of the same name, led by Dr Leanne McCormick from Ulster University and Dr Elaine Farrell from Queen’s University Belfast, which focuses on the sexually deviant woman, the bad mother and the criminal Irish woman in Boston, New York and Toronto.

The research, compiled over five years, shows that while Irish women have been largely written out of the history of Irish-America, they were often sent across the Atlantic alone, sometimes as young as the age of 11 and the money they sent back was a key resource for Irish families.

"We hope that bringing to light untold stories of Bad Bridget's shows the diverse experiences Irish girls and women had in North America."

"The podcast highlights that experiences of Irish women in New York, Boston and Toronto included criminality and deviance, and it explores how gender, age, ethnicity and prejudice played a role."

Ulster University students help Lecturer in his quest to raise £10,000 for local charities