The 17th Standing Conference on Teacher Education, North and South (ScoTENS), took place on 17 and 18 October with the theme of ‘Leadership across Boundaries: Challenges for Educators and Teacher Educators’.

The 17th Standing Conference on Teacher Education, North and South (ScoTENS), took place on 17 and 18 October with the theme of ‘Leadership across Boundaries: Challenges for Educators and Teacher Educators’.

At this year’s conference, Shauna McGill, Course Director for PGCE Primary from Ulster University’s School of Education, along with a colleague from Dublin City University, Lorraine Harbison, have been awarded the John Coolahan Award for their research report on 'Universal Design for Learning as a Context for embedding Technology in Primary School Mathematics'. Their research explored student teachers' use of ICT in Primary School Mathematics Education on the island of Ireland, and was conducted between 2017-2018.

Professor John Coolahan from NUI Maynooth and Professor Emeritus Harry McMahon from Ulster University had established SCOTENS in 2003 to create a safe space for teacher educators – North and South – to come together and discuss issues of common interest and to explore ways of co-operating closely together. 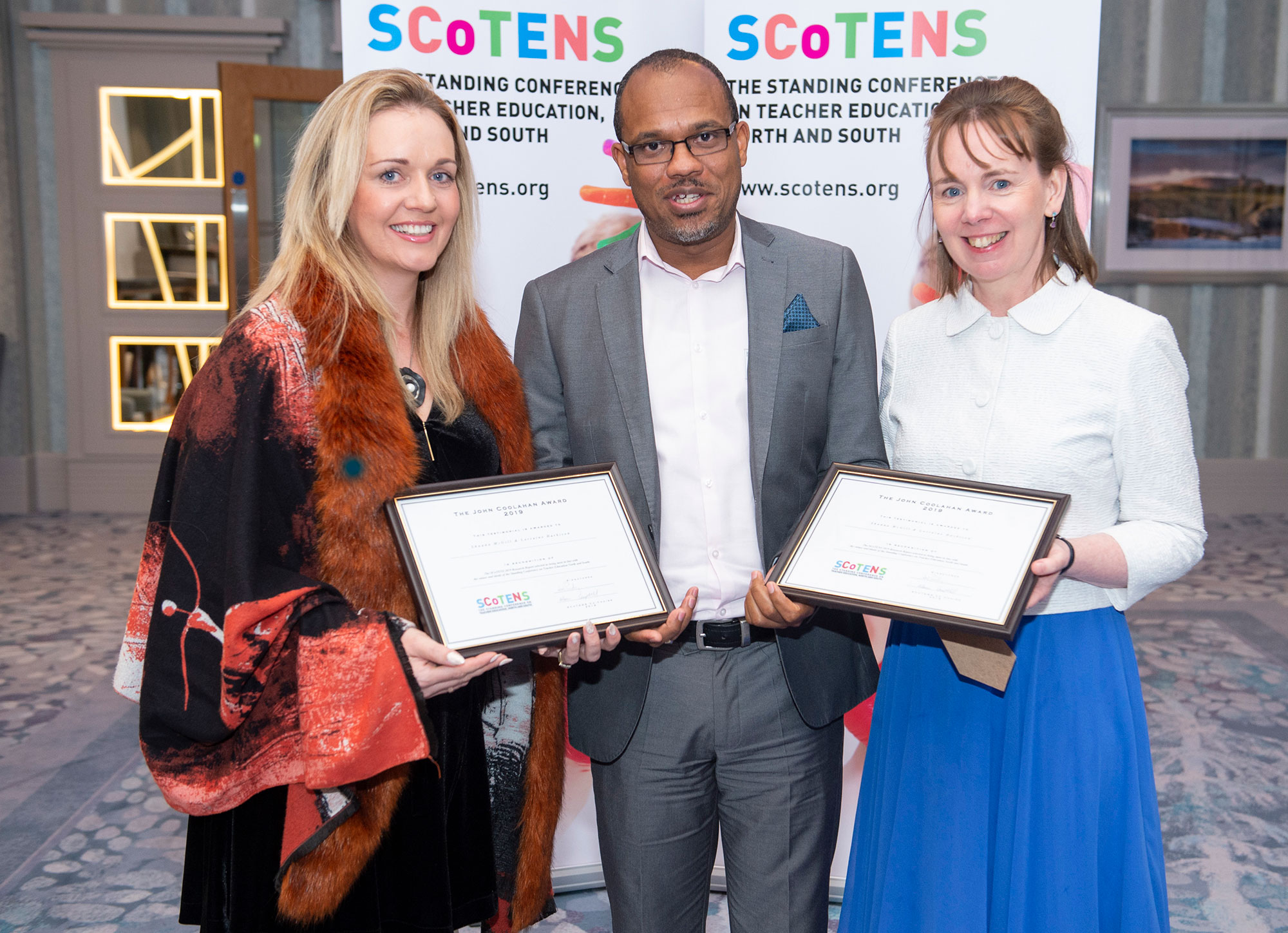 Shauna McGill, Course Leaders for PGCE Primary at Ulster University’s School of Education is pictured receiving the John Collahan Award alongside Lorraine Harrison, from Dublin City University, for their research report on ‘Universal Design for Learning as a Context for embedding Technology in Primary School’, the award was presented by Professor Paul W. Miller Head of the School of Education, and Professor of Educational Leadership & Social Justice, University of Greenwich.

This new book was launched by Professor Marilyn Cochran-Smith, Cawthorne Professor of Teacher Education for Urban Schools at the Lynch School of Education, Boston College, who is widely known for her work on teacher education research, practice and policy, and for her commitment to teacher education for social justice. Professor Cochran-Smith described the book as ‘most impressive’ and ‘very likely to have an impact’.  She particularly praised the chapter which looked towards the key factors which will impact on the future of teacher education, describing its predictions as smart and timely.

“SCoTENS has been involved in supporting a wide range of research, conference and exchange projects since it was founded in 2003, so it was a great honour to launch our book on teacher preparation in Northern Ireland in the presence of educators, academics and influencers who work collaboratively to achieve cross-border co-operation in matters concerning the training of teachers across Ireland, north and south. We are delighted that the quality of Shauna’s research report has been recognised by SCoTENS  through the John Coolahan Award. This is the second year running that Ulster academics from the School of Education have received the award.”