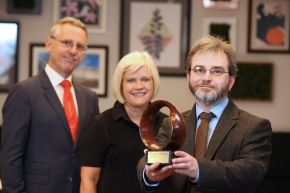 Dr Mark McCartney, senior lecturer from Ulster University, has been honoured as this year’s recipient of Maths Week Ireland’s award for ‘Raising Public Awareness of Maths.’

Presented in Belfast during Maths Week 2019, Dr McCartney is the first person from Northern Ireland to be presented with the award which was inaugurated in 2016.

An author and editor of five books on the history of mathematics and natural philosophy, the Maths Week Ireland accolade recognises Mark McCartney’s outstanding work within maths education in schools, colleges and Ulster University as well as his portfolio of research on nonlinear dynamics and his published works.
His co-authored books have focussed on eminent nineteenth mathematicians from Ireland, including Belfast’s Lord Kelvin and George Gabriel Stokes whose innovations and contributions to the world of mathematics and physics are part of a significant body of work stretching from Isaac Newton and Stephen Hawking.
Mark McCartney’s latest book, George Gabriel Stokes: Life, Science and Faith, celebrates the bicentennial of the Sligo born mathematical physicist and covers the many facets of Stokes’ life and work through an edited collection of essays which Mark co -edited with Andrew Whittaker and Alastair Wood.

”The Maths Week Ireland team are thrilled to present Mark with the 2019 trophy for his work in schools, his involvement in Maths Week from an early stage and in particular for his promotion of the history of mathematics which has led to a body of important work on mathematicians with Irish connections.”

Dr McCartney is originally from Lisburn and attended Lisnargavey High School and Friends School Lisburn before graduating in Applied Mathematics at Queen’s University Belfast. He went on to complete a PhD in Theoretical Physics at QUB in 1993 and took up a lecturing post at Abertay University in Dundee.

After a four- year stint in Scotland Mark McCartney returned home to join the School of Business and Management at Ulster University as a researcher in mathematical modelling, before taking up a maths lecturer post. Currently Senior Lecturer in Mathematics at Jordanstown. Mark is also the 2018 -2020 President of the British Society for the History of Mathematics.

Mark was accompanied at the awards ceremony by his wife Karen, their son Peter (15) and Ulster University colleagues and said on receiving the award:

“It’s such an honour to be given this award and I’m truly grateful to everyone at Maths Week Ireland. They have done so much to bring maths to the forefront in everyday life and highlight its importance and contribution to the world - past, present and future.

The award itself is a beautiful piece of artwork and I love the fact that the design is based on a mathematical object, the Möbius strip.

I’m hugely proud to be associated with Maths Week Ireland. The impact of Maths Week Ireland quite literally extends across the island of Ireland, north to south and east to west and highlights that maths is everyone and not just academics.”

Maths Week Ireland, supported locally by the Department for the  Economy, is the biggest celebration of mathematics of its kind and schools, colleges, universities, shopping centres across Northern Ireland are this week taking part in a huge range of events to promote the benefits of maths to pupils and the wider community.