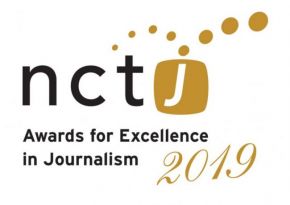 Ulster University staff and students have been shortlisted for three prestigious UK-wide industry awards for journalism excellence, in the National Council for the Training of Journalists (NCTJ) Awards for Excellence 2019.

The first NCTJ award nomination is for teaching innovation. The university’s award entry outlined the specialist training developed by the university in resilience building for reporters going into hostile environments like war zones, disaster areas and dealing with terrorism.

The second award nomination, for the Features category, is Masters’ student Nick Winchester. Nick, who comes from England, is nominated for his feature which examined the experiences of a Syrian family and their difficulties in returning home from a refugee camp in the Lebanon. Nick travelled to the Lebanon last Easter to undertake a series of reports about refugees, cannabis growing and the aspirations of young people in the country once dominated by war, and he has reflected on these experiences in his writing of these issues.

The third award nomination, for the category of ‘Top Scoop,’ is for MA Journalism student Brendan Marshall from for his reporting on the St Patrick’s night tragedy at the Greenvale Hotel in Cookstown, Co Tyrone. One of the first reporters on the scene of the tragedy Brendan reported for BBC Five Live and RTÉ, among other international broadcasters, and he has been recognised for his responsible reporting of this incident, in which three teenagers tragically died.

“To get three industry nominations when competing against some of the world’s  most respected and well-resourced newsrooms is a great endorsement of the standard of work of the staff and students.

“As part of the journalism courses at Ulster, our programmes provide comprehensive training in the skills needed to enter the journalism profession internationally and the Masters degree is accredited by the National Council for the Training of Journalists for print, online and broadcast journalism.

“Our students are taught to follow and apply the Ofcom or Independent Press Standards Organisation codes on reporting serious injury, death, trauma, vulnerable people, children and also the regulations and law relating to privacy. The students’ reporting reflects this while still getting across important public interest stories, as seen in both Brendan and Nick’s work.”

Winners of the awards will be announced at a gala dinner at the Stadium of Light, Sunderland, at the end of this month. The awards will be presented by Kevin Maguire, associate editor of The Mirror newspaper.

For details of all the shortlisted awards, go to www.nctj.com/Awards/AwardsforExcellence/shortlist-2019