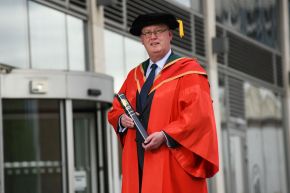 The Chief Constable of the Police Service of Northern Ireland (PSNI) Sir George Hamilton has been awarded an Honorary Degree by Ulster University for his outstanding contribution to policing with the community and for his leadership of the PSNI.

The degree, Doctor of Laws (LLD), was conferred upon him by Vice-Chancellor and President of Ulster University, Professor Paddy Nixon, at a ceremony on the Belfast Campus this evening.

“Ulster University is delighted to recognise Sir George Hamilton for his commitment to policing with the community over three decades. An alumnus of the University, he has devoted his life’s work to keeping people in Northern Ireland safe and as his tenure as Chief Constable comes to an end, we are proud to recognise his many achievements over the course of his career.”

Sir George Hamilton joined the Royal Ulster Constabulary (RUC) in 1985 and since then has held a variety of operational roles in policing. He was the first local police officer to have served in both the RUC and PSNI to be appointed as Chief Constable by the Policing Board and has held this role since June 2014. He was recently awarded a knighthood in the Queen's Birthday Honours list.

“I am humbled and delighted to accept this honour, particularly here among many people that I admire, respect and have worked alongside over the last number of years. I accept it, not as my own but as an honour that has been awarded to Policing and the Community for all the hard work and risks that have been made to make progress in policing possible.

“Over the last 20 years, we have invested so much as a community and as a Police Service.  Communities and politicians working together with police have shown great leadership and taken great risks to bring peace. As I leave this noble job that I have loved so much, let us believe in a safe, confident and peaceful society. To do so, we have to face our fears; to go beyond our comfort zones; to be selfless; to be ready to listen and have challenging but respectful conversations.”

Shortly before the graduation ceremony, Sir George Hamilton was interviewed by journalist and author Brian Rowan as part of Ulster University’s ‘In Conversation’ series discussing his policing career ahead of his forthcoming retirement later this month.