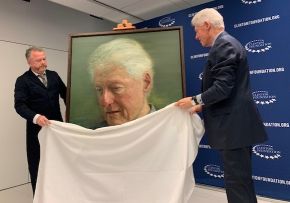 The two Universities are collaborating with the University of Massachusetts (UMass) in the development of a new peace and conflict studies research programme to be delivered in Ulster University’s Magee campus in Derry~Londonderry, in Dublin and at the UMass Amherst campus.

The partnership will establish three Clinton PhD Scholarships in Peace Studies in recognition of the vital role President Clinton played in supporting and encouraging the often challenging journey to secure peace in Northern Ireland after decades of conflict.  Linkages between the three scholars will enable the sharing of expertise in peace studies at each university and will forge academic and civic exchanges between the universities and their local communities.

The research opportunities were announced at an event, hosted by the Clinton Foundation in New York, to unveil the portrait of President Clinton created by renowned Ulster University alumnus Colin Davidson.

During his address at the unveiling ceremony, President Clinton stressed the vital role of education in society.  He said “We owe it to generations to come to this the greatest age of discovery and empowerment and inclusion in human history.  But to do it we have to meet some stern opposition.  I don’t like living in an age of resentment and division, I like living in an age of possibility and hope.”

Perhaps now more than ever, the learnings from our past, have every opportunity to shape the prospects for our future prosperity. Our universities have a constructive and informed part to play in that journey – safe places in which to pose questions, explore solutions, and develop and interpret research with real impact in our communities.

In announcing this new venture with our academic partners, it is rewarding to see the presidential portrait unveiled. Colin continues to inspire many of our fine art students and his incredible talent so skilfully captures the formidable presence and legacy of a President who committed such time and energy to the peace process in Northern Ireland.”

“DCU has a strong track record of scholarship in the areas of Conflict Resolution and Peace Studies, as reflected in the establishment of the Institute for International Conflict Resolution and Reconstruction (IICRR), opened by the then US Secretary of State Hillary Clinton in 2012. We are delighted to join with Ulster University and UMass in establishing these PhD scholarships in honour of President Clinton and to build a strong transatlantic programme of collaborative research in this key area of global significance.”

The scholarships will be advertised shortly by the three universities.