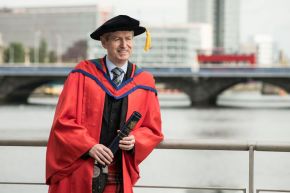 Leading tirelessly from his appointment in 1981 Richard, an engineer by trade, was awarded an MBE in 2004 for his services to pipe band music in Northern Ireland.  His commitment is such that even after suffering a stroke in the same year he returned within the season to lead the band to victory at their last three championships, including the band’s fourth World Championship title. The great respect for Richard from within his own band and from his competitors is as much a part of the band’s hallmark as is its list of prizes.

“I am delighted to receive an honorary degree from Ulster University in recognition of my achievements in music. Leading the Field Marshal Montgomery Pipe band has been a true privilege and it has allowed me to travel the world and represent Northern Ireland on a global platform. It is a great honour to be among this prominent group of honorary graduates and I would like to offer my warmest congratulations to all students graduating today.”