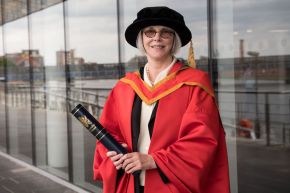 American Martha Pope is receiving the honorary degree of Doctor of Laws (LLD) from Ulster University today, for her outstanding contribution to peace talks, which led to the Good Friday Agreement.

A senior aide to Chairperson of the peace talks, Senator George Mitchell, Martha was instrumental in making the agreement happen working with all political parties and two governments in the role of facilitator.

Now a pastel artist living in Washington, DC, Martha is recognised as a role model for women and working class communities whom she included in her consultations during the peace negotiations, adding greatly to the social inclusiveness of the final outcome.

“I am deeply moved to be awarded an honorary degree from Ulster University. The people of Northern Ireland, and their ability to show hope and resilience in the face of adversity, continue to inspire me. It is a great honour to be able to share this ceremony with the latest generation of young graduates as they embark on the next exciting chapter of their lives.”