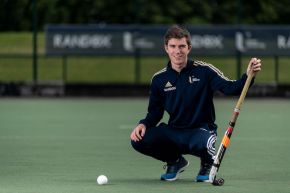 Joel has always had a keen interest in sports including rugby, football, basketball but began playing hockey and soon realised he had a natural flair and love for the sport.

When he first left school Joel began coaching the hockey team at Carrickfergus Grammar. During this time, he also studied horticulture in Greenmount College but his heart lay with coaching.

“I’ve always loved sports and when I was encouraged to get involved with hockey at aged 11, I quickly became passionate about it. What I love about coaching is working with people and helping to make a difference in their lives. I take a holistic approach.”

Joel has played for Ulster at under 16 and under 21 levels so understands the discipline required to play at the top level. He says however the knowledge acquired during his time at Ulster University has helped to develop his coaching skills.

“The course has really helped to improve me as a coach. It has also opened more doors and opportunities with the industry and as a result, I have begun to do mentoring work with GB Hockey. This would not have happened without the support of Ulster University.”

The future is bright for Joel as he continues to develop his coaching career and build on the foundation received at Ulster University.


“My ambition is to work in high performance sports and coach at a high level. I’d love to train a national hockey team one day!”