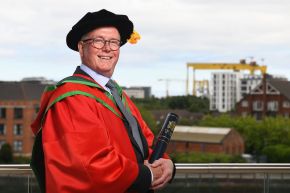 Dedicating his career to Belfast Boys Model School,  Alan Logan, is receiving the honorary degree of Doctor of Science (DSc) today from Ulster University for services to education and his role in inspiring pupils to strive for better.

Born in Co. Down and now residing in Belfast, he has positively impacted the educational achievement, aspirations and lives of pupils, their families and the community.

Mr Logan joined Belfast Boys Model School (BBMS) as a Biology Teacher in 1979. Having served in a number of different roles, he became Principal in 2012, holding his position until retirement in 2018. Under his tenure as Principal, Mr Logan has led and empowered staff to fundamentally change education in the school. He created an educational and pastoral ecosystem responsive to the wide-ranging needs and abilities of all pupils.

Now used as a case study for best practice in Northern Ireland, as a result of his leadership the number of pupils achieving five GCSEs with English and Maths nearly doubled leading to significant growth of the 6th form and the best A Level results in the school’s history - 21% higher than average for non-grammar school males in Northern Ireland.

As well as making a positive impact on academic results, in an area affected by the post-conflict environment and where households have some of the lowest education skills recorded in Northern Ireland, Mr Logan has embedded new practice and partnerships to promote equality, diversity and social inclusiveness.

“It is a great honour to receive this honorary degree from Ulster University in recognition of my career at Belfast Boys'Model School. I am very proud of the school's success in changing the educational achievement, aspirations and lives of its pupils, their families and the community. In accepting thisI would like to thank all those who have done and are continuing to do so much to guide and encourage the pupils, both within and alongside the school, including Ulster University. I would also like to acknowledge educators across Northern Ireland for their tireless work and dedication and wish the graduates of 2019 the best in their future careers.”