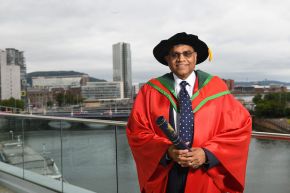 Having demonstrated an unfailing commitment to growing the scale, diversity, global reach and innovation of Allstate Northern Ireland,  Suren has cultivated the growth of the Northern Ireland operation. From an initial investment creating 250 jobs in Belfast, the company has become one of Northern Ireland’s most significant employers, with a workforce of 2300 in three centres in Belfast, Derry/Londonderry and Strabane.

The presence of companies like Allstate underscores the strengths of Northern Ireland as a location for foreign direct investment, helping augment Invest NI’s efforts to secure further international investment for Northern Ireland whilst placing a strong focus on the talented graduate population.

“I am humbled to receive an honorary degree from Ulster University. Since establishing a presence in Northern Ireland in 1998, Allstate has been committed to contributing to the prosperity of the country and its people. Ultimately, this degree recognizes the talent and hard work of everyone who has worked at Allstate Northern Ireland over the past two decades. Many of them have been Ulster University graduates, and I strongly believe that the graduates in Northern Ireland are among the best in the world. I wish them every success in their future careers.”