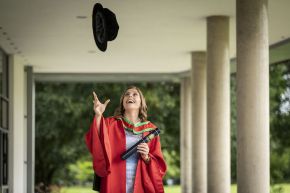 Making sporting history in 2018, Katie Mullan is receiving the honorary degree of Doctor of Science (DSc) for outstanding services as captain of the Ireland ladies hockey team.

Captaining the first ever Ireland team, in any sport, to reach a World Cup Final, Katie is an inspirational leader whose attitude, dedication and determination has assisted a team of young women to push their limits and achieve success. Entering the 16-team tournament ranked 15th, Ireland, under the 24 year old captain gave a performance that changed expectations and ambitions within Irish sport.

Starting her sporting career as a camogie player for Eoghan Rua CLG in her native Coleraine, it wasn’t until she attended Dalriada Grammar School that Katie started playing hockey more seriously. Inspired by her PE teacher and former Ireland hockey international Bridget McKeever she made her senior debut for Ireland in  2012 reaching a landmark of 100 caps by age 22.

Following her success on the pitch she has called for enhanced funding for female sport to redress the balance with male counterparts. She has sought to encourage and inspire women and girls to set and achieve their goals, to get involved with sport for all the physical, mental and social benefits it can offer and inspired the next generation of Irelands sporting heroes.

“I am so pleased to have received an honorary degree from Ulster University. I would like to dedicate this award to the students balancing studies with their sporting career and assure them that their tireless dedication and work ethic will take them far wherever their path may lead."