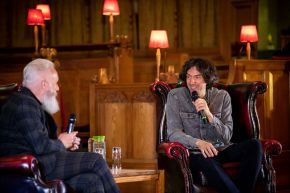 Snow Patrol frontman Gary Lightbody swapped the stage for the interview chair last night where he discussed at length his career successes, his struggles with mental health, the pride he has for the local music scene and Snow Patrol’s recent Ward Park gig.

Ulster University honoured Gary Lightbody with an Honorary Degree of Doctor of Letters (DLitt) for services to the music industry in 2012.

The student and Ulster University alumni audience were treated to an in depth look at the personal and professional life of Bangor born Gary Lightbody. Professor Paul Moore quizzed the honorary graduate on his childhood, his first foray into music and Snow Patrol’s rise to global success.

Mental health is an issue close to Gary Lightbody’s heart. In an extremely open and honest exchange he opened up about his struggles with mental health and alcoholism and his recent recovery. He stressed the importance of opening up about mental health, speaking out and getting the help that you need. Attendees were encouraged to make a donation to Ulster University’s student-led mental health initiative Mind Your Mood.

In the latest in a series of conversations with notable honorary graduates and alumni organised by the Development and Alumni Relations Office, Gary Lightbody praised Ulster University for their support of the creative arts in Northern Ireland.

As an avid supporter of the local music scene, Gary surprised Ulster University music student Daniel Ferguson who was the supporting act for the event during his rehearsals.

“Gary embodies the spirit of Ulster University, his commitment to the music industry in Northern Ireland is encouraging the next generation of musicians to fulfil their potential.

His success serves as an inspiration to Ulster University students and alumni.”