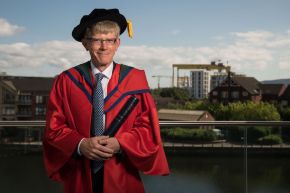 Senior Vice President of West Coast Production at Home Box Office (HBO) Jay Roewe is receiving the honorary degree of Doctor of Letters (DLitt) from ulster for services to the Screen Industries in Northern Ireland.

Jay was one of the key decision makers instrumental in locating the production of Game of Thrones in Northern Ireland in 2009. 10 years later the show has grown into a global phenomenon contributing a direct economic benefit of over £200m to the Northern Irish economy and bringing substantial growth to the Screen Tourism industry.

He was hugely influential in delivering the 2013 UK Tax Credit for High End Television Drama, without which it may not have been possible to keep Game of Thrones in Northern Ireland. A strong advocate of NI he has given freely of his time speaking about the unique partnership approach with government and the Northern Ireland talent and work ethic at several economic conferences in both the US and NI.

Supporting young people from NI, as a member of the US Board of Cinemagic he has been actively involved in securing venues for events and encouraging others from the screen industry to attend and support their work.

“I feel extremely proud to be awarded an honorary degree from Ulster University. I strongly believe in the screen industry in Northern Ireland and greatly respect the work of the university in equipping young people with the creative skills needed to succeed in this emerging field. It’s a great honour to be able to share this ceremony with the latest generation of talented young graduates and wish them every success in their future endeavours.”