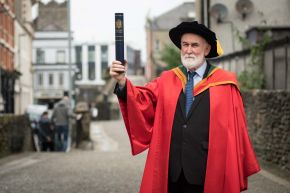 Eamonn has worked tirelessly throughout his career facilitating community arts, development and peace building projects, programmes and events in Northern Ireland. Living and working in Derry/Londonderry his most recent project ‘Towards Understanding and Healing’ works to create a safe space where victims and survivors of the troubles can heal and grow together.

Training community facilitators to facilitate positive storytelling and dialogue he is also continuously engaged in writing having worked on several publications that seek to inform and educate including ‘To tell you the truth...’ featuring interviews from victims, survivors and perpetrators of the conflict in Northern Ireland and ‘Forgotten People of Ulster- current stories from the Orange community in the Republic of Ireland’. He also secured funding and developed the graphic novel aimed at young people, ‘Burning Issues’ focusing on the cultural issues surrounding bonfires.

In his life's work, Eamonn has reached out to victims and survivors with the premise 'we want to hear your story’ and in doing so has gained the trust of a wide network of people helping to ensure inclusiveness and sustain healing at the heart of both communities.

“I am very humbled to receive an honorary degree from Ulster University. It is particularly poignant to accept this honour on the Magee campus, in a city that I have spent my career working towards a conflict free society that  celebrates diversity and equality. I would like to offer my warmest congratulations to all the students graduating today who will illuminate the power and impact of peace no matter where their career may take them.”